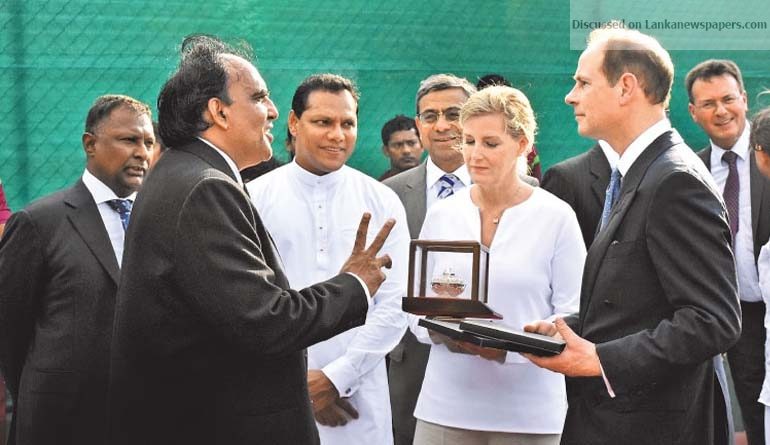 Prince Edward Earl of Wessex and Countess Sophie who will be the chief guests at Sri Lanka’s 70th Independence Day celebrations on February 4 representing Her Majesty the Queen made a historic visit to the Sri Lanka Tennis Association (SLTA) yesterday to lay the foundation stone for a modern tennis complex at Green Path.

The proposed tennis complex will have five indoor and six floodlit outdoor courts with all modern facilities, which will play a vital role in moulding Sri Lankan future tennis stars. The estimated cost for the facility is Rs. 800 million and SLTA hopes to complete the facility within one and a half years. After laying the foundation stone Prince Edward unveiled the inauguration plaque at the SLTA.

“The British Royal family has a history of being closely associated with tennis as patrons of the game. SLTA is the second oldest tennis association in Asia and we celebrated our centenary in 2015. SLTA is honoured by this historic royal visit as we inherited the game from the British,” said SLTA president Iqbal Bin Isaack. “The visit allows us the opportunity to gain worldwide exposure for our wheelchair tennis that has brought immense credit to the country.”

Isaack further stated that the new complex will be a major leap forward for Sri Lanka’s tennis and thanked Aelian Gunawardene of JAT Holdings for coming forward as the developer of the complex.