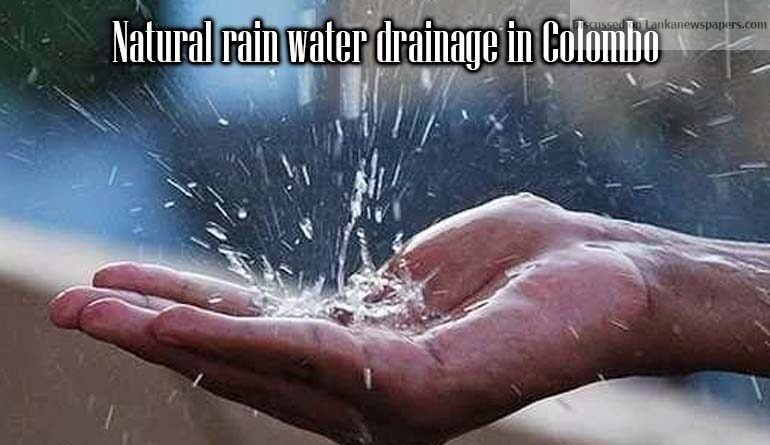 In the past good or bad the rain water flowing across the ground in Colombo, eventually found its way into the Beira, and through over flows into the sea or were directed to out falls into the sea. The pollution into the Beira through illegal outlets have been curtailed and outlets for rain water are maintained. There is an outfall into the sea located adjacent to the old House of Representatives and President’s office. It functioned well as it regulated, controlled and maintained the water level in the Beira. This over spill was respected and maintained in most of the development plans prepared so far, even as late as the Megapolis Regulations and guidelines, Map No: 7; Central Business District (CBD), of April 2016.

Unfortunately, a more “advancedconcept”but totally out of scale to Colombo and Sri Lanka is the concept of an Urban Development now executed mostly through dealers. It displays a total disregard for the cultural matrix of the country and takes an even more frivolous view of its people. This forcehas never been interested in mitigating any adverse effects to the environment nor is there much concern of its immediate neighbours.They operate in another make believe thin strata of a pseudoworld where everything is prompted and supported by selfish self-centred external forces.

The EIA for the Port City development identifies the necessity for the protection of the Beira outfall and the need for maintaining the outlets along the sea front but then folds over and goes into a negative trajectory of a cheap political nature. As it talks of the poor quality of the outlet having a negative impact on the water in the Port City and or Galle ace and the impeding silting up of the outlet location, obstructing the discharge from the Beira lake. This is a reference to the possible pollution emanating in the Beira that may affect the good reputation of the Port City and Galle Face green or rather brown. It concludes for the Port City Development at a cost to the city as a whole.

We seem to have forgotten that the Chinese are used to seeing and even living in a more polluted environment than we have been subjected to and we can never forget the dog sized bandicoot rats in the open drains of Singapore in 1978. Today the drains are covered but the monsters may be still inside.

The Port City Project is a moot point that should have been and even today discussed in greater detail. It needs to be taken up and argued amongst knowledgeable think tanks. Unfortunately,the sellers of souls have decided for us all. In the meantime filling and consolidation of the project area is taking place using up our own scarce resources, of free sand pumped up from the ocean and precious rubble procured at a bargain price, destroying our rock out crops, to facilitate a project that may bring very little returns for Sri Lanka or its people.

Due to the extensive filling taking place for the extended Port City, the natural seepage into the sea in many areas along the sea front is not taking place, and the natural rain water runoff, including the water soaked into the ground from soakage pits and septic tanks is accumulating in the ground and progressively raising the level of the water table.

The water table was originally about two to a meter and an half lower, but all signs indicate that it is on an upward increase. This increased water table will lead to stagnation, an offensive smell and an increase inthe breeding of vector borne diseases. The stagnant water will ingress and force its way through the smallest fissure into the lower parts of most buildings creating additional problems for its owners and users.

With the rains more water would be added to the already rising water table. The Beira would fill up and spill over creating a flood in the neighbourhood. All consequent to the original Beira spill as an important element in the rain water drainage system been disregarded and the south west monsoon currents permanently sealing off and blocking the reduced outlet with sand.

It is unfortunate,that the original Beira spill is regarded as unworthy and could be disregarded in favour of an Alien Port City Development. But at what cost to the real community in the city.The fact that the Port City would generate pollution and with the possibility that garbage and raw sewage may be pumped out into the sea, has already been raised by Dr Ranil Senanayake.

Whoever builds this China Town of casinos, apartments, restaurants, shops, offices massage parlours, spas and brothels will have no obligation to the host country, as the management would continue to import the work force to run it. And pray to the money god or goddess that it worships, supports and hopes to collect its lucrative profits from. Soon Chinese triads, best known for arms and drug smuggling, counterfeiting, credit card fraud, loansharking, cyber-crime, software piracy and smuggling people, animals and plants will take over.

Once they get in, it would be impossible to get them out. To complete the development, an unrealistic dream development package already selected is in place. The Contractors who would descend,using their own imported labour, their own imported materials and accessories, to complete the works as quickly and as cheaply as possible and after a year’s liability period, vanish into thin air and lick their pickings somewhere hidden in South Asia.

Thus relegating the next generation of Sri Lankans as forced refugees in their own water logged land holdings. A country now depleted of scarce resources. In fact, there will be no benefit for Sri Lanka except for the immediate short term gains, already collected, but will produce a festering hideous white elephant that grew too ambitious and big with total disregard to human scale to a Sri Lanka that originally owned the land and the sea.