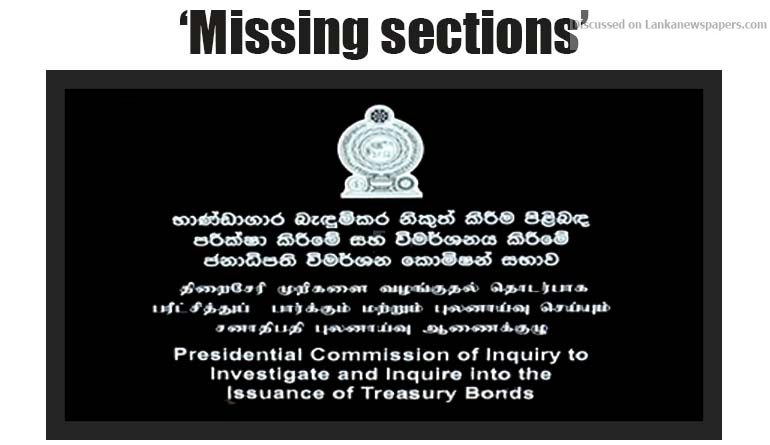 President Maithripala Sirisena has invited leaders of all political parties represented in parliament today (Jan.29) to the Presidential Secretariat to anwer quries being raised in some quarters about the ‘missing sections’ of the Bond Commission report.

Presidential Secretary Austin Fernando yesterday told The Island that on the instructions of President Sirisena, leaders of political parties or their representatives had been invited for a discussion. Fernando said that the decision had been taken in the wake of growing allegations both in and outside Parliament that sections of the report were missing.

Responding to a query by The Island, Fernando said that there was absolutely no basis for such allegations.”We expect all political parties to be represented at today’s meeting,” Fernando said, adding that those who had expressed concern over an attempt to suppress sections of the report could seek a clarification at the meeting with the President.

The Island learns that President Sirisena had called the special meeting in the wake of some members of parliament demanding that Secretary to the President be summoned. Parliament last met last Wednesday (January 24)President Sirisena received the report on Dec 30, 2017.

Fernando said that political parties could raise any issue pertaining to the Bond report. The official explained leaders of JO constituents were also invited.

Meanwhile, top Joint Opposition spokesman MP Prasanna Ranatunga yesterday denied President Sirisena’s recent claim that an unholy alliance in parliament had blocked proposed debate on Bond Commission report ahead of Feb 10 local government polls. Gampaha District MP Ranatunga said that JO parliamentary group leader Dinesh Gunawardena and JVP leader Anura Kumara Dissanayake had pushed for the debate ahead of the poll at the last party leaders meeting. The SLFPer alleged that those loyal to President Sirisena and the UNP had wanted to delay the debate for obvious reasons.