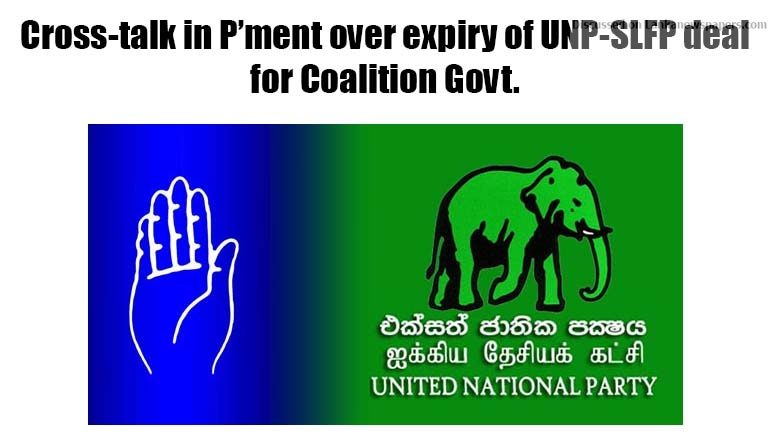 Opposition lawmakers questioned the validity of the unity Government agreement, which was entered by the United National Party (UNP) and the Sri Lanka Freedom Party (SLFP) for an initial period of two years and came to an end on or before 31 December 2017.

According to Speaker Karu Jayasuriya, he has not been informed of a renewal of the agreement that supports the national Government, which has increased provisions to accommodate the number of Ministers and the State and Deputy Minister portfolios.

Demanding an explanation from Prime Minister Ranil Wickremesinghe, UPFA Joint Opposition Parliamentary group leader Dinesh Gunawardena stated yesterday in Parliament that the term of the Unity Government has expired, and the number of ministerial portfolios should be reduced to meet the Constitutional limits.

“Prime Minister moved a motion in the Parliament elected on 17 August 2015 proposing to establish a Unity Government. He has pledged that it will act according to Article 46 of the Constitution. According to the Constitution the number of Cabinet Ministers, State Ministers, and Deputy Ministers that can be appointed is definite. But does he agree that these numbers are violated? As per the Article 46 (6) of the Constitution these appointments have to be recommended by the President, based on the recommendations of the Prime Minister,” Gunawardena said.

“We would like to know if the recent appointments of the State Ministers Sriyani Wijewickrama and Piyasena Gamage were constitutional. According to the motion which led the Sri Lanka Freedom Party (SLFP) and the United National Party (UNP) to sign, the agreement to establish a Unity Government was valid for a period of two years. It expired on 31 December 2017. Therefore, the number of Cabinet Ministers should be reduced to 30 as per the provisions of the Constitution. Let us know if the agreement between the SLFP and UNP has expired,” added Gunawardena.

In response, Higher Education and Highways Minister and Parliament Leader of the House Lakshman Kiriella stated that the Joint Opposition need not worry about internal matters of the Government. “Why are they against Sriyani? We are more than willing to accept those who are willing to cross over. Do you want her back? Are you saying that she should not be given a position? National Government is an internal matter,” said Kiriella, assuring the House that the Prime Minister would respond soon.

However, Chief Opposition Whip (JVP) Anura Dissanayake held that the Prime Minister should explain the position in the Parliament and submit a copy of the extended agreement to the Speaker.

“On the basis that this Parliament will establish a unity Government, the number of Cabinet Minister positions were increased to 48 and the total of State and Deputy Minister positions were increased to 45. The Prime Minister stated in Parliament that the agreement between the SLFP and the UNP was for a period of two years. However, the agreement expired on 2 September 2017, not on 31 December 2017. I raised this issue many times in Parliament and was not given an answer. This is a national issue where the number of ministerial positions could be increased in a national Government. Both parties have the right to extend the agreement, but let the Speaker have the extended agreement,” Dissanayake said.