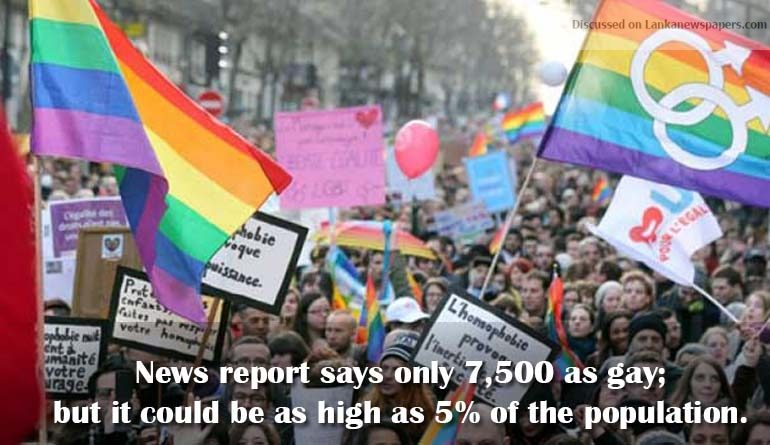 Recently there has been a spate of speculation as to exactly how many persons in Sri Lanka identify as Lesbian, Gay, Bisexual & Transgender (LGBT).

A news article published a few weeks ago, ran a headline stating that the “Gay population in Sri Lanka now tops 7,500,” maintaining there were only 7,500 Gay persons in this country! Based on the total population of Sri Lanka – that would mean that only 0.035% of the population in the country identified as LGBT. That number defies common sense.

Based on our experience in the field for the past 17 years, our assumption has been that, conservatively speaking, the real figure could actually be close to 10%.
However, we recently decided to map this phenomenon to check that figure—something the Government of Sri Lanka itself has never done.

An important fact to understand is that stigma and discrimination force LGBT persons underground, therefore an entirely accurate count is almost impossible to determine.

In the US and the UK, mapping studies conclude that at least 2-5%of their populations identify as LGBT. Is it possible that the figure could be higher here in Sri Lanka?

This may seem a rather large proportion and the report does mention that this number may be slightly skewed for the simple reason that the enumerators conducting the mapping were “LGBTIQ” friendly and therefore approached more LGBTIQ persons for the study.

It also mentions that LGBT persons felt more comfortable with these enumerators and therefore felt free to identify themselves.

“These hard-working people get up and go to work every day, pay taxes, and even vote in elections. And yet they do not receive the basic protections that every other person in this country can rely on. It’s time for that to change. “

Of course, these figures represent only some districts of Sri Lanka, but already it is safe to say that the nationwide percentage is much closer to 5% than the miniscule number claimed in that article.
If 5% were an accurate estimate, that would mean that approximately over 1,100,000 Sri Lankans identify as either L, G, B or T!

But perhaps more important than these numbers are the shocking experiences revealed in the mapping study. Our Sri Lankan family members, neighbours, co-workers and friends who are LGBT face a great deal of stigma and discrimination because of their sexual orientation or gender identity. If even one person were being treated this way in our country, that would be too much.  Yet, the study shows that 46.7% of LGBT people experience police harassment, 72.2% were refused education, 57.14% were terminated from work, and 70% were refused medical assistance.

Some face physical and sexual abuse as well as emotional distress.
In such situations, many of us would rely on support from family and friends, but unfortunately, more than 58% of the respondents reported experiencing discrimination from their friends as well.
The lack of understanding about sexual orientation and gender identity leads to the lack of acceptance by even our parents and loved ones.

“Based on our experience in the field for the past 17 years, our assumption has been that, conservatively speaking, the real figure could actually be close to 10%. “

Some respondents reported being forced to marry someone of the opposite sex even though they were not physically or emotionally attracted to them. The study reported that 27.2% of the LGB respondents were married.  Sexual and physical abuse have also been reported over and over again, especially by lesbian and bisexual women in forced marriages.

A significant number of LGBT persons stated that they would be willing to be open about their sexual orientation or gender identity if they had a better economic standing. Unfortunately, none of the LGB respondents reported having an income of over LKR 90,000.00 and only 11.3% earned above LKR40,000.00 monthly—because their sexual orientation is limiting their ability to obtain appropriate jobs.

Every single day across our nation, a large number of citizens of Sri Lanka are discriminated against, criminalised and marginalised with no legal redress because of their sexual orientation or gender identity. The existence of the LGBT community has been confirmed and shown in significant numbers, and the Government of Sri Lanka is responsible for putting in place measures to protect ALL of its citizens regardless of who they are.

These hard-working people get up and go to work every day, pay taxes, and even vote in elections. And yet they do not receive the basic protections that every other person in this country can rely on. It’s time for that to change.

“Here are the values that I stand for: honesty, equality, kindness, compassion, treating people the way you want to be treated and helping those in need. To me, those are traditional values.”
– Ellen DeGeneres