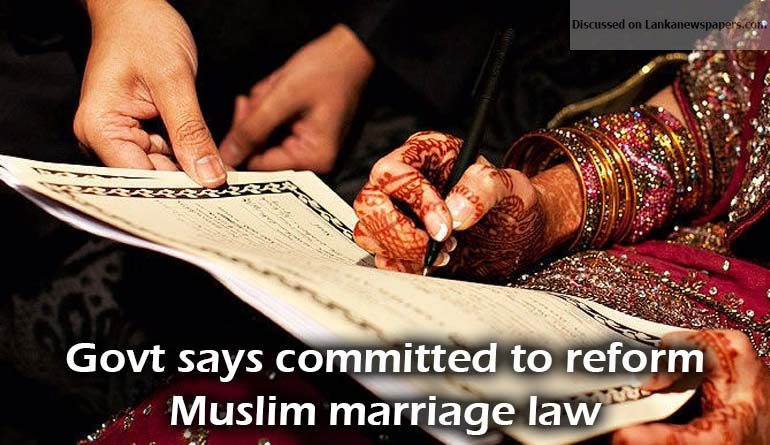 The Government of Sri Lanka says that it remains committed to reform the minimum age of marriage for girls under the Muslim law, with the active participation of the concerned community.

“A committee had been set up under the aegis of the Ministry of Justice to carry out the necessary legal reform,” the Sri Lankan delegation told the Committee on the Rights of the Child in Geneva on Tuesday (16).

The Government was following a two-pronged approach to the issue, namely sensitization of the concerned community and discussions with community leaders, while respecting the Convention’s provisions, the delegation said responding to questions from experts.

Introducing the report, Chandrani Senaratne, Secretary at the Ministry of Women and Child Affairs of Sri Lanka, noted that building a better future for children, who constituted approximately 30 per cent of the population, and ensuring their security was one of the key objectives of the new Government of Sri Lanka.

In the ensuing discussion, Committee Experts commended the positive steps taken by Sri Lanka with respect to children’s rights, but noted that children did not seem to be understood as rights holders and fully prioritized.

They also inquired about domestication and dissemination of the Convention, inter-sectoral coordination in the implementation of children’s rights, child rights budgeting, a comprehensive data collection system for children’s rights, a children’s commissioner, the impact of businesses on children’s rights, the minimum age of marriage under  Muslim law, child marriage, discrimination against children in institutional care, children with disabilities, and lesbian, gay, bisexual, transgender and intersex children, comprehensive anti-discrimination law, risk of landmines and unexploded ordinance, respecting the view of the child, violence against children and corporal punishment, child labour and children employed in sex tourism (“beach boys”), gender-based violence against girls and female genital mutilation, juvenile justice and the minimum age of criminal responsibility, early pregnancy and adolescent health services, the high school dropout rate in rural areas, child trafficking, missing children, and the rehabilitation and reintegration of former child soldiers.

As for the protection of lesbian, gay, bisexual, transgender and intersex children from discrimination, the Sri Lankan delegation said that certain provisions under the Penal Code criminalized same-sex conduct, but that did not reflect the current practice in the country.

The delegation said that the Government was committed to reform all aspects of the Penal Code to bring them into line with international human rights standards.

In all its United Nations treaty body reviews, Sri Lanka had consistently taken the position that article 12 of the Constitution on equality and non-discrimination did not contain an exhaustive list of discrimination grounds.

“As part of the ongoing constitutional reform, Sri Lanka would specifically address discrimination based on gender identity and sexual orientation.”

They also said that there was zero tolerance for child labour, and there were several monitoring measures that were included in the new child labour policy.

As for children employed in sex tourism, the Government had started a pilot project in southern Sri Lanka to work with provincial educational authorities to identify the so-called “beach boys” and offenders.

In his concluding remarks, Bernard Gastaud, Committee Expert and head of the task force on Sri Lanka, encouraged the State party to step up its efforts to obtain relevant statistics in order to inform its child programmes and to secure the necessary training and capacity-building for relevant staff.

He also called on the Government to eliminate child marriage and other harmful practices, to identify the remaining missing children, to prevent discrimination in all areas of life, to adopt relevant legislative acts, and to invest further in the national reconciliation process.

In her concluding remarks, Ms. Senaratne stated that the dialogue had been very fruitful and that it would help the Government identify in which areas it needed to invest more effort.  The Government was pleased to learn that it was on the right track.