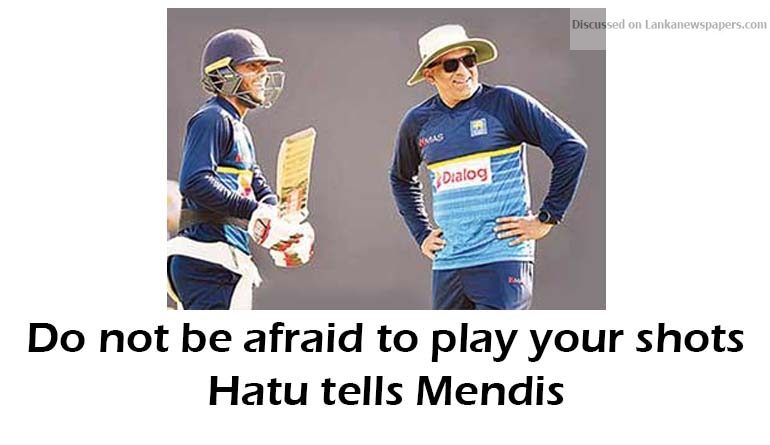 Many are the cricketers who have attributed their transformation into more effective players to coach Chandika Hathurusingha. Having promised the fans to start playing the Sri Lankan brand of cricket soon, the 49-year-old has been moving about forming the nucleus that will help the team to get back to their glory days.

Watching Sri Lanka play one-day cricket last year was a painful experience. Already world’s worst fielding unit, Sri Lankan batsmen adopted a total lethargic attitude and often were bowled out without utilizing their quota of 50 overs. No wonder they lost 23 of the 29 ODIs in 2017 including three clean sweeps.

The overwhelming success that Sri Lankan teams of yesteryear enjoyed in ODIs was because they were attacking. The fear of defeat was not there. That exactly is what Hathurusingha is trying to bring back.

Young Kusal Mendis is back in the side for the tour of Bangladesh and Hathurusingha has given him the license to go after the bowling.

“What the Head Coach told me was to stick to my game and not to be afraid to play my shots. The best advice I have received is not to curb my shots,” Mendis told Sunday Island before the team’s departure to Bangladesh yesterday.

“The good thing is that even the captains and coaches before this didn’t want to change my style. All what I was told was to stick to my game. However, the decisions I took while batting perhaps were wrong. Maybe the selection of shots is something that I can work on. Those are things that I need to look into. I need to read the situation and I have got to have a few options rather than sticking to one thing. I have worked on those areas. Looking forward to execute them,” Mendis added.

Hailed by former great Sunil Gavaskar as the best young batsman in the world, the 22-year-old was axed from the tour to India and was told to play domestic cricket. “Very pleasing to come back to the side. I look forward to do well in the games that are ahead. I remember having a decent series against Bangladesh when they were in Sri Lanka last year,” Mendis, who posted a career best 194 in Galle against Bangladesh in March last year went onto say.

Gavaskar wasn’t the only one to express his disappointment when Mendis was axed from the side as former players like VVS Laxman and Sanjay Manjrekar joined him followed by Indian captain Virat Kohli and Ravichandran Ashwin. Mendis had scored a fabulous hundred in the second Test against India at SSC in August last year.

Mendis is surprised at the warmth both ex-players and even opposition show towards him. “I started playing at a very young age and I find that both former players and opponents have been extremely nice to me. It feels good. But you need to back yourself up with runs. Maybe that was done to give me some confidence as I was low on confidence. It is really pleasing when people speak so high of you,” Mendis went onto state.

“As a player, you like to play against worlds’ number one ranked team. Was disappointed to miss out on the Indian tour, but then again, I have got only myself to blame. Had I scored some runs in the Pakistan series, I would have gone on that tour to India. I have to learn from the mistakes I have made.”

Since he wasn’t part of the Indian series, Mendis spent his time watching the Ashes where the trio of Mitchell Starc, Josh Hazlewood and Nathan Lyon took the lion’s share of wickets as Australia regained the Ashes with a 4-0 series win. These were the same bowlers that Mendis smashed all over the park during Sri Lanka’s 3-0 whitewash of then world’s number one ranked team in 2016.

“That series brings back fond memories for me as I scored my maiden Test hundred there and we went onto beat them 3-0. That was a superb attack. That was a dream hundred and the support I received from the team was overwhelming.”

“When you get dropped you feel bad about it. When you are in the team you don’t probably appreciate things, but when you are not there, you feel the good moments you have had. I missed that during the last couple of weeks. When those things come to your mind, you really get fired up to do well. I trained very hard. There was lot of support from the selectors and the team management and I look forward for the upcoming series.”