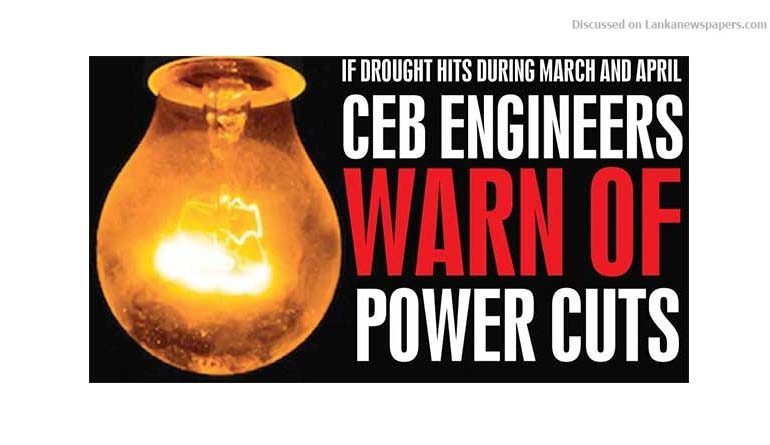 Ceylon Electricity Board (CEB) engineers have decided not to participate in the technical evaluation process of the 100 megawatt (MW) emergency power tender, which is to be purchased by the Government,……as a solution to face up to the drought conditions which may occur during the months of March and April this year.

Due to this decision taken by the CEB engineers, there could be a strong possibility of power cuts coming into effect during the months of March and April, informed sources informed Ceylon Today.

The tender is to be opened today (12) and the CEB Engineers’ Union (CEBEU) said that the arbitrary conduct of the Public Utilities Commission of Sri Lanka (PUCSL) and the failure of the Government to control the PUCSL, had prompted them to opt out of the evaluation process.

The sources said that during the dry spell even if one unit of the 300MW Norochcholai coal power plant were to breakdown, the situation could become worse.

They added that further complicating the situation would be the third phase of the Norochcholai plant having to be shut down for a 45-day period for scheduled maintenance work and thereby 300MW will be lost to the National Grid during that period.

Though the CEBEU is opposed to the purchase of high cost emergency power, Committee Member of the union, Athula Wanniarachchi said that it was with the greatest displeasure that the tender book, for this tender, had been prepared owing to the failure to build at least one Big Firm Power Plant since 2013.

“But, we are not participating in this tender evaluation. Due to this, during the dry spell, expected in March and April, there is a likelihood of power cuts taking place. If such a scenario is to take place then, the rap for it should be taken by the officers of the PUCSL and those bigwigs of the Government who support such actions,” said Wanniarachchi.

The SCAPC will, after having considered the recommendations, award the tender to a suitable bidder.

Due to an ongoing internal battle within the CEB, regarding the Least Cost Long Term Generation Expansion Plan (LCLTGEP), which was filed by the CEB for 2018-2038, the CEBEU had withdrawn its members from the TEC and resorted to trade union action in the past few months.The General Manager of the CEB also had informed the PUCSL that they cannot implement the LCLTGEP compiled by the PUCSL instead of the LCLTGEP compiled by the CEB.

However, the PUCSL, while rejecting those claims, stated that the LCLTGEP, which had been approved by them for 2018-2038 should be implemented by the CEB.

The engineers have also pointed out that there are many other reasons why an imminent power crisis may take place within the country in the months ahead.

Also, the private-owned 1,600 MW Kelanitissa EAS gas turbine machine had not been functioning for the last few months. Added to this the 160 MW Kelanitissa Combine Cycle, owned by the CEB, is also due to be shut down shortly for scheduled maintenance.

Due to these reasons, if an uninterrupted power supply is to be given the proposed 100 MW emergency power should be purchased.

The Media Spokesman of the Ministry of Power and Renewable Energy Sulakshana Jayawardene said that given the shaky situation, if the CEBEU does not participate in the technical evaluation process of the said tender today, it would be tough to overcome a dangerous situation from taking place.

“This is a dangerous situation. However, this is not the responsibility of one individual. For this predicament, the CEB, the engineers, the PUCSL, the Ministry and the public who oppose, whenever power plants are to be constructed, without any valid reasons all should be held accountable,” said an officer of the Ministry who requested anonymity.