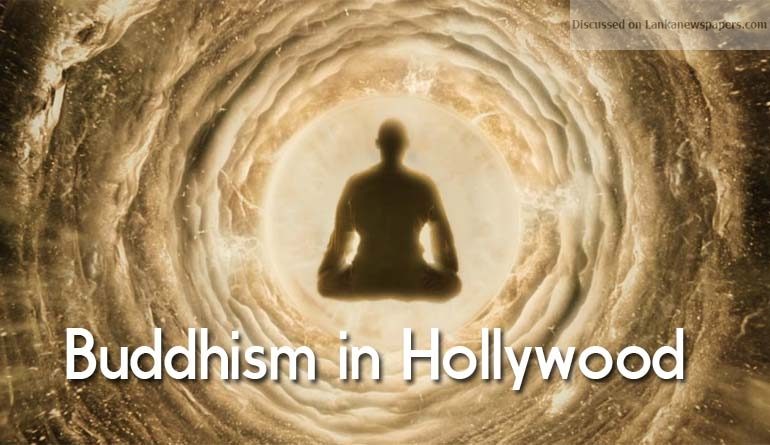 In the 2014 French Sci-Fi movie, Lucy, played by Scarlett Johansson, develops psychokinetic abilities when the drug CPH4, smuggled inside her stomach, is absorbed into her bloodstream. While appreciating the fact that Lucy is a cinematic venture and not a comparison to the Buddha, it is interesting to note that what Lucy goes through bears uncanny resemblance to what the Bodhisathva goes through on his path to Buddhahood.

Professor Norman played by Morgan Freeman eloquently points out that humans use only 10 percent of their cerebral capacity. Norman hypothesizes that if humans are able to use 20 percent of the cerebral capacity, we would have power over our own bodies. “With 100 billion neurons, there are more connections in the human body than stars in the galaxy,” says Norman. He points out that humans have a gigantic network of information we have not accessed. It is this ‘network of information’ that the Buddha tapped into when He attained Buddhahood.

So, when Lucy reached 100 percent of cerebral capacity one can interpret that she too, in theory, attained Buddhahood, with the help of a catalytic drug. But Lucy disappears at the end of the movie which would suggest that she attained Nibbana.

According to Norman’s hypothesis once the cerebral capacity reaches 20 percent it opens up and expands the rest of the brain and in his own words the “obstacles fall away like dominos”. This could be writer-director Luc Besson’s version of the jhanas – various stages of mindfulness – attained through meditation.

At 28 percent of cerebral capacity Lucy doesn’t feel pain, fear, desire; all emotions that could be tamed by meditation. In fact, arahant Moggallana Thera was mercilessly beaten by a gang of robbers. But he maintained his composure without a trace of anger, because arhanthood enabled him to negate such negative emotions.

Lucy at one point says, “What makes us ‘us’ is primitive. They’re all obstacles.” By ‘obstacles’ Besson may be alluding to obstacles of defilements or kilesa that can be overcome by meditation. In the next breath Lucy says that the pain her captive is experiencing is blocking him from understanding. But fictitious Lucy, like Moggallana Thera, is able to look beyond the pain to understand greater truths in life. Lucy compares this stripping away of emotions to taking the human element out of herself. Could Besson unbeknownst to himself be referring to the state of Anathma?

Lucy is also able to control magnetic and electric waves. The Buddha could control much more. In performing ‘Yama Maha Pelahara’, the Buddha issued a stream of water from one half of his body while simultaneously issuing a column of fire from the other.

Accessing 40 percent of brain capacity would enable control over other people. Which Lucy realizes when she is able to overpower her captives. Psychokinetic abilities may seem like stuff of science fiction, but the Buddha exhibited such power and control over matter millennia ago when, with the power of His wisdom and psychic abilities He defeated Baka Brahma.

The whole movie is woven around Lucy’s attempt to pass on the knowledge she garners upon reaching 100 percent cerebral capacity. The Buddha has said that the greatest of the daanas or alms is the dhamma daana. Whereas the Buddha propagated His wisdom through Dhamma discourses and the sutras, Lucy does it with a pen drive.

At the end, reaching 100 percent of cerebral capacity Lucy strips away all barriers of space and time to understand the secrets of the universe. It is said that the Buddha could see the whole universe, the past, present and future as if one could examine a Veralu fruit sitting on ones palm.

The only deviation from Buddhist philosophy is that, at the end of the movie Lucy disappears, but also becomes omnipresent and immortal. In Buddhism nibbana is similar to extinguishing of fire. Nothing remains. But Besson is spot on on his treatment of the theme of ‘time’, when Lucy says, “Film a car speeding down a road. Speed up the image infinitely and the car disappears. So what proof do we have of its existence? Time gives legitimacy to its existence. Time is the only true unit of measure. It gives proof to the existence of matter.”

This epitomised in the Buddha’s words, ‘Sabbe sankhara anicca’ (All things are transient). Everything is impermanent, subject to change over ‘time’.

Bet you didn’t know that the whole Star Wars Trilogy is heavily influenced by Buddhism, as exemplified by the poster that reads ‘Train yourself to let go of everything you fear to lose’ – Yoda. From the focus on meditation and the student-teacher relationship the Jedi order bears uncanny resemblance to Buddhist monastic tradition. Most fans used to believe that the Jedi were in fact celibate, until George Lucas put an end to the debate saying that “Jedi Knights aren’t celibate – the thing that is forbidden is attachments.” If that’s not Buddhist, I don’t know what is.

The Jedi has their own version of the Four Noble Truths; “Fear leads to anger. Anger leads to hate. Hate leads to suffering.” This is what happens to Darth Vader when he hungers for more power and control which leads him to evil as opposed to Luke Skywalker who seeks the Force within.

It’s weird how easily sci-fi movies can convey Buddhist themes. Starting from the name of the protagonist to the comprehensive message about consciousness The Matrix is riddled with Buddhist messages. Fanatics opine that Neo is an anagram for One, referring to the notion of oneness in Zen Buddhism.

Neo is awakened from the world he believes to be real into the reality that is the Matrix. The word Buddha translates to ‘the Awakened One’ as Neo is awakened into his new reality. Morpheus his guru tells Neo to ‘wake up’ and ‘free your mind’. In fact, another recurrent Buddhist theme in the movie is the student-disciple relationship.

The Fountain is in fact, three parallel stories where the two lead roles, Tom and Izzy are pitted against situations that deal with transience and death. A present-day scientist is looking for a drug that could cure his terminally ill wife, a 16th century scientist is looking for the Mayan tree of life and an astronaut is hurtling through space towards a nebula where he believes that he would be reunited with his wife.

The Fountain is a movie with interesting Buddhist undertones. At first look it seems as if these three parallel stories are reincarnation of Tom and Izzy. But look closer and you’ll realize that it’s a movie about the inevitability of suffering and letting go.

Tom loves Izzy with such passion that he refuses to accept the fact that they would be forced apart with death. He refuses to accept the fundamental fact that death comes to all and suffering is inevitable. Finally he comes to long for death because he realizes that it offers the only relief from his longing for Izzy. This coming of full circle to death resembles the cyclic nature of life and death, themes of transience and reincarnation in Buddhism. Hugh Jackman floating towards the supernova in the lotus position is aptly symbolic of the Buddhist idea of enlightenment.

One of the most violent movies of the 90’s Fight Club is the last movie you’d probably put in to ‘Buddhist’ category. But it has strong Buddhist philosophical undertones. Even the fights are strangely meditative.

Fight Club revolves around an underground fighting ring where unhappy men vent their frustrations through ‘mindful’ fighting, which requires absorption and strictest concentration. The Buddhist philosophy of denouncing material happiness is pronounced in the plot as the protagonist loses all his material wealth in an explosion in his apartment.

Each episode of the series serves as a meditation on death. The Fisher family is the town’s undertakers and what better place to reflect on death than in a funeral home. The show deals with random causes of death, ranging from cancer to car crashes, focusing on the impermanence of life and the unpredictability of death.

The Fisher family does not have the luxury of being blissfully oblivious to death like most of us who think that only others face such tragic ends. The Fishers deal with death on a daily basis and as a result try to make peace with life. The series epitomizes this line in Dhammapada;

‘There are those who do not realize that one must die

but those who realize this settle their quarrels.’

The aforementioned are but a few unlikely Buddhist movies. Movies such as The Big Labowski, Ground Hog Day, Lost in Translation and American Beauty are among other movies that employ Buddhist themes.