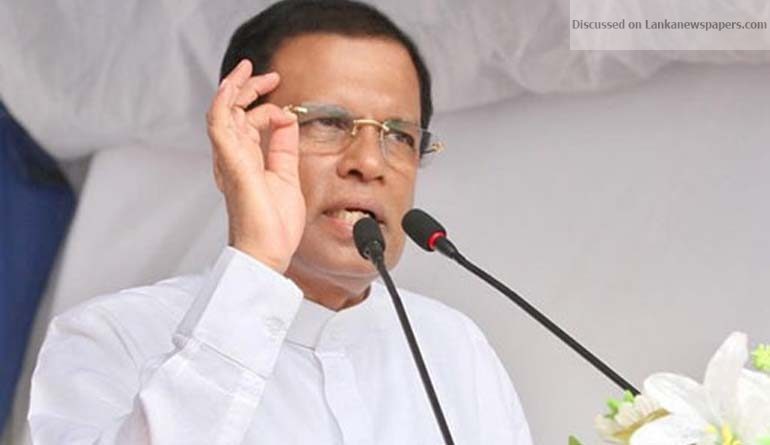 President Maithripala Sirisena will make a special statement to the media on the report on the Central Bank bond issue and the recommendations made by the Presidential Commission of Inquiry at a special briefing that will be held on January 3.

The report on the controversial Central Bank treasury bond issuance was handed over to President Maithripala Sirisena by members of the Presidential Commission of Inquiry.

“The Report on the Treasury Bond Inquiry by the Presidential Commission of Inquiry was officially handed over to me, a short while ago,” the President tweeted.

The Commission’s Chairman Justice K.T. Chitrasiri handed over the report and two other members of the Commission, Justice P S Jayawardene and retired Deputy Auditor General, V Kandasamy were present together with the Secretary to the Commission, S Udugamsuriya.

Secretary to the President, Austin Fernando was also present on this occasion, the President’s Media Division said.

President Sirisena appointed the Presidential Commission of Inquiry to investigate and report on the Central Bank bond issue on January 27, 2017.

Sri Lankan Prime Minister Ranil Wickremesinghe made unwelcome political history on Nov. 20, appearing before a presidential commission of inquiry into a 10 billion rupee bond scandal that has shaken his government.

Sirisena appointed the commission to investigate the sale after opposition lawmakers demanded an independent inquiry, claiming that the bond issue had raised government borrowing costs by more than $1 billion over the two years.

The Central Bank of Sri Lanka rejects those claims, but the government’s credibility began to fade after it emerged that the bank had suddenly decided in late February 2015 to raise 10 billion rupees from a sale of 30-year government bonds with a coupon (fixed interest rate) of 12.5%. It had initially advertised an offer of 1 billion rupees with a 9.5% coupon.

Bonds worth 7 billion rupees were snapped up by Perpetual Treasuries Limited, a primary dealer owned by Arjun Aloysius, a son-in-law of Arjuna Mahendran, the then-governor of the central bank. Mahendran, a Sri Lankan-Singaporean banker, was chosen for the top banking job by Wickremesinghe.