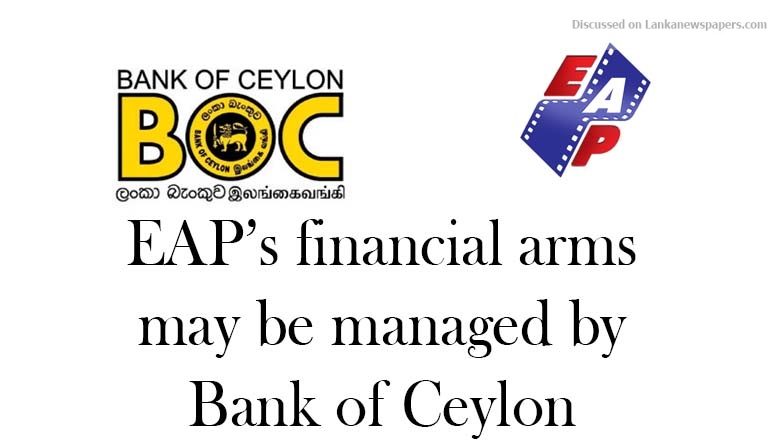 The Central Bank of Sri Lanka (CBSL) has asked the Bank of Ceylon (BOC) to be the managing agent for the financial arms of the EAP Group–Edirisinghe Trust Investments (ETI) and Swarnamahal Financial Services PLC.

Public Enterprise Development Minister Kabir Hashim met the BOC board this week as part of negotiations for a possible management deal, authoritative sources said. Should the BoC be made managing agents, there would be more discussions in the coming weeks on terms and conditions, they said.

The businesses of EAP Holdings–including its broadcast and media arms–are up for sale but it is understood that the CBSL is keen to strike a management arrangement for the finance companies of the group. A due diligence has already been done by auditors and studied by the BOC.
ETI, established 40 years ago, offers services in the areas of fixed deposits, gold loans, leasing, hire purchase, personal loans, business loans and mortgage loans. It has 46 branches around the country.

Swarnamahal Financial Services is a listed company licensed by the CBSL. It has 11 branches and six pawning centres.

EAP deal broker detained at BIA
A Malaysian businessman negotiating on behalf of a Singaporean company to buy EAP Group businesses was detained with three others at the Bandaranaike International Airport (BIA) last month while attempting to smuggle out foreign currency.

The detection took place on November 10. Two suspects were stopped around 7 am at boarding gate 14 by Airport and Aviation of Sri Lanka (AASL) security when the money showed up on the x-ray machine near the departure lounge. Both were Malaysian nationals scheduled to leave on UL314 to Kuala Lumpur. An inspection led to the discovery of a total of US$ 100,000.

The money in Mr Jayaram’s luggage was found by Customs officials in the Silk Route lounge. He, too, was due to leave for Kuala Lumpur on UL314. The Silk Route exclusive facility allows passengers to relax while airport employees and Customs officials attend to all formalities before embarkation. Upon questioning, Mr Jayaram (who said he was involved in a power project in Vavuniya) had claimed the money was the proceeds of a win at a popular casino in Colombo. However, he could not offer documentary evidence for this claim.

Due to substantial political pressure, Mr Jayaram was released without penalty, reliable BIA sources said. He left the country (for Kuala Lumpur) shortly after his detention–before an inquiry could be conducted–after handing over the US$ 50,000 that had been in his possession to one of the other suspects. He has given a guarantee that he will return for an inquiry when it is scheduled.

The inquiry into non-declaration of currency by two other suspects (who were detained at the gate) was held on the same day. They were fined Rs 200,000 each and released. The undeclared currency was forfeited. The inquiry into the actions of the fourth suspect was postponed till November 23. All three left for Kuala Lumpur in the night of the same day. Mr Jayaram was released in the morning.

Neither Mr Jayaram nor the fourth suspect honoured their word by presenting themselves for the subsequent Customs inquiry, the Sunday Times reliably learns. The proceedings were, therefore, conducted ex-parte. The undeclared currency was forfeited with no penalty imposed.

The Malaysian businessman has been in and out of Sri Lanka over the past few months. Authoritative political sources said he is a facilitator for several business deals–including the Horton Square (Pvt) Ltd, a proposed mixed development project in Horton Place, and power projects. Straits Grid Pte Ltd, the Singaporean company vying to invest in the EAP Group, is also an energy company.

The offence the group was booked on is non-declaration of currency. Under regulations, anyone taking more than US$ 10,000 in any form of foreign currency, including notes, bank drafts or travel cards, must declare it to Sri Lanka Customs. Anyone taking currency notes of more than US$ 5,000 must also declare it.

The EAP Group is in negotiations to sell its businesses to Straits Grid Pte Ltd. The negotiations are being fronted by Mr Jayaram, who is a longstanding business partner of R.M. Manivannan, Chairman of Supreme Global Holdings. He was most recently listed as a director–along with Mr Manivannan–of Horton Square (Pvt) Ltd, a proposed mixed development project in Horton Place. Mr Jayaram’s address entered in the company registration form was in the British Virgin Islands and common to hundreds of other offshore entities from around the world.