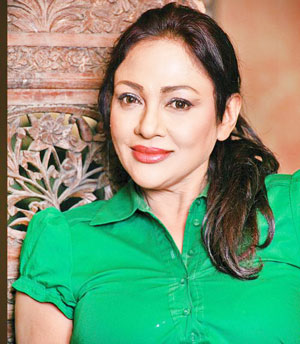 When I consider the Article 91(1) (d) (xiii) of the Constitution, I hold that if a candidate in a Parliament Election is a citizen of Sri Lanka and any other country on the day of Parliament election or on the day of taking oaths as a Member of Parliament (MP), he/she cannot be considered as an MP and that office of such a person as an MP is a nullity

Geetha’s tryst with glamorous fame came in the form of a beauty competition. The Davasa newspaper organised a beauty competition at Bentota in 1973. Over 100 dainty damsels participated but Geetha was crowned as the fairest of them all. One of the judges Ronald Fernando felt that Geetha should act in films.

Her first film contract was signed for K.A.W. Perera’s ‘Wasana’. Though Wasana was Geetha’s first film, it was not fated to be her screen debut. Geetha Kumarasinghe’s first film to be released in theatres was Neil Rupasinghe’s ‘Lassana Kella’. It was released on 20 June 1975.
A few months later came ‘Damayanthi’. March 1976 saw ‘Wasana’ hitting the screen. Then followed Manik Sandrasagara’s ‘Kolomba Sanniya’. A star was born!

Gamini agreed to meet Geetha. Fonseka too was impressed by Geetha and arranged for a screen test at cinemas studio. Word got around in movie circles that a Sinhala version of Brigitte Bardot had been discovered at a beauty pageant in Bentota. Filmmakers flocked southwards to the Kumarasinghe household in Bentara

Now that the Supreme Court has upheld the Appeal court ruling that unseated Geetha Kumarasinghe the question of whether the entire list of UPFA candidates for Galle District is disqualified will once again emerge. Some politicians or public interest litigants may even test this out by resorting to legal action. How and what the courts would determine on the issue if and when raised before appropriate tribunals is a matter of conjecture. There is, however, some expert opinion available on the question which may shed some light on the judicial implications of the issue.
Lawyer/Researcher Gehan Gunatilleke
Attorney -At- Law Gehan Gunatilleke is a Research Director at Verité Research. He compiled a brief note after the appeal court ruling on Geetha Kumarasinghe’s election. The brief was prepared with the advice and support of Dr. Nishan de Mel, Viran Corea, Sabrina Esufally, Shamara Wettimuny and Rehana Mohammed. This brief is of great relevance in the context of the Supreme Court upholding the earlier Appeal court Quo Warranto Writ. I am therefore taking the liberty of quoting extensively from that note with due acknowledgement in a bid to keep the readers informed of the position.
The briefing note by Gehan Gunatilleke is presented in three sections. The first section explains the legal recourse available in the event that a disqualified person is elected to Parliament. The second explains the provisions of the PEA with respect to the grounds on which a nomination paper can be rejected. The third section explains why the disqualification of a candidate cannot result in the invalidation of the nomination paper in which he or she was nominated. It must be noted that this paper was prepared in the aftermath of the Appeal court ruling. It is however perfectly valid in the context of the current Supreme court judgement too.
1st Section – Disqualification of Candidates
“Article 91 of the Constitution sets out the grounds on which a person may be disqualified from being elected to Parliament. For example, article 91(d) (xiii) provides that a ‘citizen of Sri Lanka who is also a citizen of any other country’ is disqualified from being elected to Parliament.
This particular disqualification was introduced through the 19th Amendment to the Constitution. Meanwhile, section 14 of the Parliamentary Elections Act(PEA( reiterates these grounds by referring to the provisions of the Constitution.
Section 92(2)(d) of the PEA provides for a remedy where a candidate who is disqualified from being elected to Parliament is in fact elected. It states that an election petition may be filed against a candidate where he or she is disqualified at the time of the election. Section 93 provides that such a petition may be filed against a candidate in the Court of Appeal in terms of article 144 of the Constitution.
The Court may then invalidate the election of the candidate. Section 95 stipulates that only the following persons may file such a petition: (a) a person claiming to have had a right to be returned or elected at such election; or (b) a person alleging himself to have been a candidate at such election. Meanwhile, section 108 of the PEA stipulates the time period within which an election petition should be filed.

Section 19(1) of the PEA does not list a candidate’s disqualification as one of the grounds for invalidating a nomination paper. The question then arises as to whether the list of grounds contained in section 19 is exhaustive.

In interpreting section 19, the legal maxim expressio unius est exclusio alterius, meaning ‘the inclusion of one thing is the exclusion of the other’, becomes relevant.