Diplomatic tragedy in Colombo 50 years ago:

The Diplomat who was grossly unconventional when he refrained from interfering with his wife’s illicit romantic relationship under his roof for a few years finally turns aggressive. It was a sad saga from the beginning to its ghastly end, filled with tragedy; a conflict between the protagonists, lady in the midst of a forbidden tryst and a superior force with a disastrous conclusion that elicits pity or terror

The sun was shining brightly on Sunday October 15, 1967 morning at Turret Road, Kollupitiya [the present Dharmapala Mawatha]. Two young brick-layers working on a building site opposite Burmese Ambassador’s residence, where the Capri Club is now located, Wimalasena 16 and Wilbert 22 were startled by the report of a gun coming from the direction of the Boonwaat residence.  It was around 8.30 when this occurred. They had stopped work and focused their attention in the direction from where the report of the gun was heard. The two brick-layers and a houseboy in a residence adjoining that of the Burmese Ambassador’s, told the police that they saw a woman clad in a nightdress make a dramatic dash towards a car which was parked near the Green Path entrance to the house.
They watched in shocked silence as they saw a man who was following her, fire a second shot. Then, to add to the confusion, emerged a third man  who ran out of the house, got hold of the frantic woman  half dragged and half carried her into the house.

The shocked brick-layers and house boy heard three more shots and the silence. At 9.30 am, Dr. L. S. C. Mendis was summoned to the ambassador’s residence. He certified that death was due to cerebral hemorrhage due to hypertension. The doctor later told the police that he had found Shirley Boonwaat’s body at the bottom of the staircase. He also told the police that he had suggested that a post-mortem be held but this had not been agreed to. From then on things moved rapidly
Morris Raymond, an undertaker was called in. but he was not even allowed to take the measurements of the body for the coffin. He told the police that he had been informed that the body measures 5ft and 3inches. The undertaker had then been told to return with the coffin. This done he was asked to leave and return at 12.30 pm   having made arrangements to cremate the body at 1.00 pm. The funeral procession with the hearse leading arrived at the Kanatte cemetery. There were only two cars of mourners for the woman who counted hundreds of friends for almost all of them were not aware that Shirley Boonwaart was no more. One of the two cars carried two Buddhist monks. The other, the official ambassadorial Mercedes Benz, carried Sao Boonwaat, the Ambassador, his two little sons who had been rushed home from school, three aids and a woman, a Burmese domestic aide.
The gates of the Burmese Embassy remained closed immediately after the ambassador returned.
Government immediately ordered a big clamp on Burmese exits. Immigration authorities were asked to ground any aircraft which attempted to fly any personnel of the Burmese Embassy out of the island. The CID and Customs have also been ordered to prevent any attempt by the Burmese to forcibly board any aircraft or ship leaving the island. A special detachment of immigration officers were flown to KKS airport as precautionary measures against any attempt by Burmese Embassy personnel to slip through the security net. Immigration, CID, and customs men were on a 24-hour watch at all ports and airports.
Meanwhile Burmese Embassy officials were as tight-lipped as officials of the Ministry over the death of the wife of Boonwaat. 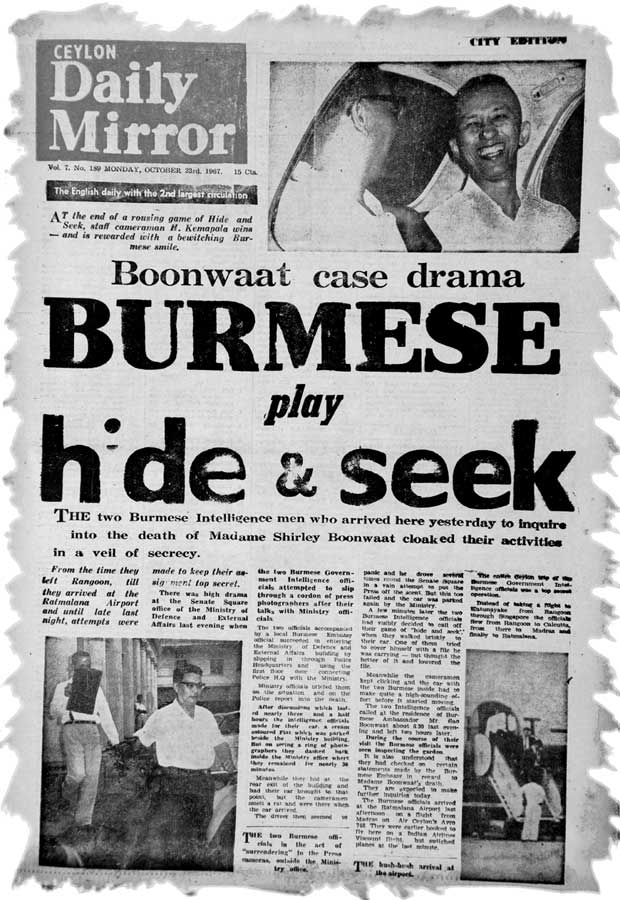 The police were not allowed to enter the premises as diplomatic immunity was claimed. Large crowds swarmed outside the Boonwaat home and remained till late at night as the news of the sudden death spread.
Meanwhile the investigation took a surprising turn when a request by the Ceylon government to interview Inche Kib Bahadun, 26-year-old son of the Malaysian High Commissioner in Ceylon to help them with inquiries into the Boonwaat death was turned down by the High Commissioner.
While expressing his regret he could not grant Ceylon government’s request, the HC then proceeded to claim diplomatic immunity for his son. This requirement by police was never explained. The Ministry of Defence and External Affairs cabled the Burmese government through our Ambassador in Rangoon, Nandadeva Wijesekara, giving a detailed report of the police investigations into the Envoy’s wife’s death. A reply was received from the Burmese Government stating that both the Ceylon Government and the Burmese Embassy’s versions would be studied carefully and that Sao Boonwaat would be recalled. This means that the investigations will be taken off the hands of our police.But the Ceylon Government had not cried halt to the police investigations and had ordered the CID to continue their watch on certain diplomatic residences.

“It is three years to the day almost when Shirley Boonwaat and I first met. I remember the day very well it was October 27, 1964. I was then playing at the ‘Blue Leopard’ when Shirley walked in with some friends and we were introduced. ” Rex told his story to a Daily Mirror journalist who wrote under pseudonym, ‘Maithree’ in an interview on following afternoon at his residence. “I still cannot believe that Shirley is dead. It is only the night before her death that she dropped in at my place of work, waited till I finished and drove me home.” he broke down at this stage. “ She was full of life and had a zest for living.
She could get enthusiastic as nobody could for any cause which stirred her sympathy” “Soon after Shirley and I met we began to get to get together and one of the first things she confided in me was her unhappiness.”  That morning when the police arrived at his home, Rex even told them that he lived in the Boonwaart house for nearly one year before  he decided to go away.“Just before she dropped me off my flat the night before her death, Shirley asked me to call for her the following morning and take her to dentist. I went there at 7.45 am but found the gates were closed, I returned home. All I wish to say now is that truth and justice prevailed in the end”

“They watched in shocked silence as they saw a man who was following her, fire a second shot”

The Shirley Boonwaat case took a dramatic turn a week later when four senior foreign ministry officials arrived from Rangoon, Burma and met their counterparts in Ceylon. The police files on the Shirley Boonwaat death remained open.  They were briefed by the police on evidence gathered by them so far. The case slashed wide open the heavy veil of secrecy that covered the diplomatic commune. The public which gazed with reverential  admiration at the private society of diplomats who live in a world of their own, have overnight been introduced to its follies and bad habits, its pleasures and passions, its weaknesses
and strengths.
They are helped by a coterie of locals who constitute the hub of cocktail society. Naturally diplomatic personnel imagine that all locals are available at a mere snap of their fingers to do their slightest bidding. It was so then, and status quo remains.  Just as much as the foreign mission here should realize that, they here to forge stronger and better relationships with the peoples of this nation, so too Sri Lankans must not sell their birthrights for wines
and scotch.

Love forbidden, that blossomed in the soft-lit confines of a night club three years ago, where Shirley first saw bearded Rex at the piano on the band stand, as he played the first chords of love. But love was not a respecter of persons or laws or customs.
A bundle laid sadly, forlornly on the centre of the table in the sitting room once filled with musical laughter, the gay vivaciousness of the woman who was now reduced to a little pile of ashes. In life hundreds flock around her, fawned over her. She was the magnetic, sparkling hub of every party. She had many friends from all walks of life, from VIPs to the ordinary man in the street.
A handful of ashes, held in an urn, wrapped in a speckles white cloth. That was all that remained of Madam Shirley Boonwaat as dusk falls on October 15, 1967.