Gowers Corporate Services, the controversial legal and consultancy firm linked to parliamentarian Namal Rajapaksa, is making headlines again with Ornella Iresha Silva, a Director of the Company and a former Private Secretary to Rajapaksa, being arrested by Police at the Airport, earlier this week.

The money laundering case involving Namal Rajapaksa is significant as it is the most serious court case against a member of the former first family, at the moment.

Although some of the family members are under investigation for more serious cases, the Attorney General’s Department is yet to indict them.

The story of Gowers Corporation Services is knotty and convoluted.

It all started with a company named HelloCorp, initially a fully owned subsidiary of ExpoLanka Holdings, which was later acquired by the young parliamentarian, who was the heir apparent in the Rajapaksa administration.

HelloCorp was formed in 2002 as one of the first Business Processing Outsourcing (BPO) companies in Sri Lanka, offering service to local and overseas clients.

At the time of the company’s formation, Rajapaksa was a Grade 11 student of the S. Thomas’ College, Mount Lavinia, who had little interest in business and politics.

During the period 2012-13, one of its flagship clients was SriLankan Airlines, with which HellopCorp had a business agreement for coordinating services.

Around that time, SriLankan Airlines was run by Nishantha Wickremasinghe, the brother of former first lady Shiranthi Rajapaksa and maternal uncle of Namal Rajapaksa.

It can be safely assumed that HelloCorp’s lucrative agreement with SriLankan was the ‘flash’ that caught the eye of the young Rajapaksa.

The 31-year-old Parliamentarian, according to a B report filed in court by the Police Financial Crimes Investigations Division (FCID) in this regard, had taken over HelloCorp through Gowers Corporate Services. At the time of the transaction, the directors of GCS were Ornella Iresha Silva and Nithya Senani Samaranayake, two close associates of Namal Rajapaksa.

Ornella was the Private Secretary to the young Parliamentarian and Samaranayake was the controversial air hostess attached to SriLankan Airlines, who was released to work for the Presidential Secretariat at an exorbitant salary.

GCS was first owned by NR Consultancy Pvt. Limited, a legal consultancy firm owned by Rajapaksa. Then the company ownership was transferred directly to Rajapaksa.

The FCID informed court that the ownership of HelloCorp was acquired through laundered money, using a trove of false invoices and documents to prove that NR Consultancy had sufficient avenues of income.

The company which is at the centre of the money laundering charges is NR Consultancy and that is why legal actions have been filed against its directors and key executives.

It is also important to understand that these directors were selected not because of their professional or educational qualifications, but rather due to their personal relationship and affiliation with Namal Rajapaksa. So, on the surface, it seemed they formed a close-knit circle of friends making multi million rupee deals through a few lesser-known companies.

The first complaint in this regard was lodged by former JVP Parliamentarian Wasantha Samarasinghe who also leads an organization named ‘Voice Against Corruption’. In his complaint, Samarasinghe alleged that MP Namal Rajapaksa had bought shares of a company named Hello Corp and set up a company called Gowers Corporate Services while being an MP with Rs.125 million earned through illegal means.

It is in this context that the Attorney General’s Department, based on the FCID’s findings, filed indictments against Namal Rajapaksa, Indika Karunajeewa, Sujani Bogollagama, Iresha Silva, Senani Samaranayake and Gowers Corporate Services on 11 counts under the Prevention of Money Laundering Act for their alleged involvement in money laundering amounting to Rs.30 million in a company (Gowers Corporate Services) owned by Namal Rajapaksa.

However, the second, fourth and sixth accused Indika Karunajeewa, Iresha Silva and Gowers Corporate Services were not present in Court when the case was taken up for hearing, but represented by attorneys. It was later revealed that Iresha Silva was not in the country and had avoided contact with the Sri Lankan law enforcement authorities.

Taking into consideration the facts presented by the Attorney General’s Department, Colombo HC Judge Piyasena Ranasinghe issued a warrant through Interpol for the arrest of Silva over her alleged involvement in the money laundering case.

A day after the warrant was issued, Silva was arrested at the Bandaranaike International Airport, in Katunayake, upon her return from the Middle East.

It was not entirely clear if Abu Dhabi authorities had executed the Interpol Red Notice or she departed on a direct flight to Colombo to be arrested on arrival by local authorities.

Her lawyer Sampath Mendis, however, informed court that Silva decided to return to the country in order to face the High Court trial.

After being produced before the Colombo High Court, Silva was ordered to be released on a cash bail of Rs. 500,000 with a surety bail of Rs. 5 million. The Court further issued an order directing the Controller of Immigration and Emigration that the accused be prevented from leaving the country.

The Attorney General’s Department did not raise objections to the defence counsel’s request and Silva was released on bail just a few hours after her arrest.

The Colombo High Court has now fixed the money laundering case for trial on February 16 and prosecution witnesses of the case were noticed to appear in Court on the next trial date.

Namal Rajapaksa’s next ordeal this week was the Police investigation into a protest the Joint Opposition held in Hambantota against the government’s plans to develop the Mattala International Airport with the help of India.

The protesters, led by Namal Rajapaksa, defied court order and held the protest in front of the Indian Consulate in Hambantota, sending a strong negative message to India.

In addition to anti-Indian slogans, they also chanted slogans against what they termed the “Chinese occupation” in the district, referring to the PPP agreement to develop the Hambantota international harbour.

It seemed as if the Rajapaksa group had declared war on the two economic giants of the Asian region – India and China.

Not surprisingly, the demonstration led to a clash between the Police and the protesters as the Police had to use teargas and water cannons to disperse them. The Police initially arrested 26 protesters and summoned several Parliamentarians involved in the protest to record statements.

Rajapaksa, Chanaka, Ranaweera and three others were arrested after questioning and produced before court. They were remanded for two weeks for violating court order and causing inconvenience to the public.

Interestingly, a few minutes after the arrest, Rajapaksa, who usually has an active social media presence, tweeted saying they were arrested for conducting a peaceful demonstration. He also tagged the ‘UNHRC’ in his tweet, giving the impression that he is seeking support from the UN Human Rights Council to obviate Police action.

Rajapaksa’s move has given rise to two important questions: Firstly, it raises a serious question as to how he is allowed to use his mobile and tweet while in Police custody.

Secondly, it brings the validity of his political slogans into question as the UNHRC was anathema to their political camp, not so long ago.

Ironically, the Joint Opposition protest was held against the Indian and Chinese investments in the Hambantota district, igniting xenophobic sentiments in the minds of the public.

But, Rajapaksa, who led the protest, had no qualms about seeking support from the UNHRC, a ‘foreign body’ which they demonized over the past eight years.

This behaviour showcases the duplicitous behaviour and double standards, not only of the young Parliamentarian, but also of the Joint Opposition.

“The Rajapaksas now lament about the Police action. But, when you hold a demonstration defying a court order, you are inviting Police action. For instance, when these Parliamentarians took part in the protest, they were aware that they would be arrested. They invited Police action, attempting to make a political drama out of it,” a government spokesman said, commenting on the Hambantota protest.

Apart from the Rajapaksa theatrics, another drama unfolded on the sidelines of the protest. A person who claims to be a journalist was assaulted by a senior Police officer in the heat of the moment. The footage of the assault went viral on social media platforms over the weekend, earning mixed reactions.

It was later revealed that Susantha Bandara Karunaratne, the person claiming to be a journalist, actively took part in the protest, holding placards and chanting slogans.

Clarifying the matter, Law and Order Minister Sagala Ratnayaka said Karunaratne was not attacked by the Police while carrying out the duties of a journalist.

“This is not to justify the assault. But, we need to get our facts right,” the Minister said.

“The law should apply to both sides equally. While the Police officer is under criticism for slapping a protester at the heat of the moment, it is also important to know that Karunaratne was not assaulted while covering the protest as a journalist. He was a protester actively taking part in the demonstration. The incident has to be understood in the right context,” Ratnayaka explained.

The matter surfaced at the weekly Cabinet briefing too. Journalists kept firing questions at Cabinet Spokesman Rajitha Senaratne over a ‘journalist’ being attacked by a Police officer during the protest.

“I had been attacked by the Police during various protests. But I never showed my stethoscope and said I was a doctor. I took part in those protests as a protester, making political demands,” Senaratne said, adding some senior Police officers who salute him today, were among those who attacked him in the past. 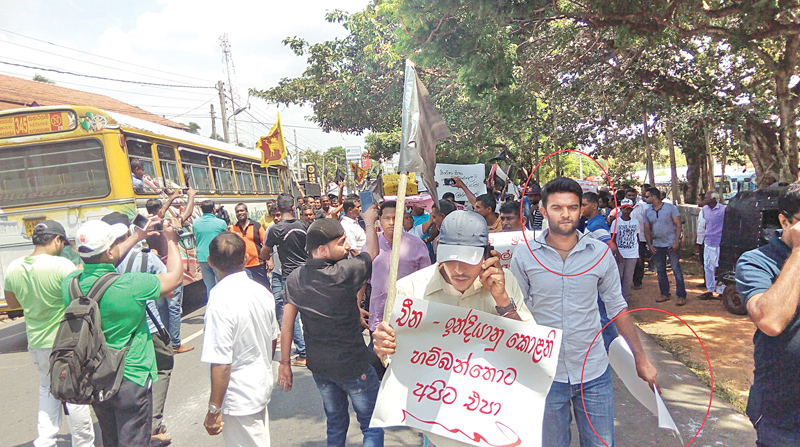 It looks like President Maithripala Sirisena is preparing for the Local Government elections as he decided to remove three SLFP electorate organizers who had affiliations with the Rajapaksa camp.

Jayaratne, formerly a Deputy Minister of the national unity government, was removed from his post as the SLFP Organizer for Puttalam.

The new changes give a clear indication that the SLFP is now on a mission to create a clean second tier leadership within the party, before the Local Government elections.

The real strength of the likes of Aluthgamage and Welgama lay in their ability to throw money at their electorates.

They had strong support systems to finance election campaigns and a sufficient number of supporters to canvas for them.

Such capabilities became essential to survive in politics as a result of the Proportional Representation (PR) system, introduced in 1978 by the J.R. Jayewardene administration .

Abeyweera’s case is a classic example showcasing how the PR system tilted the playing field in terms of the rich and the powerful, during elections.

She was first elected to Parliament in 1994 and held a deputy ministerial position until 2000.

Abeyweera could not get reelected thereafter as she lacked the wherewithal to survive in the electoral race. Many politicians, who did not get their hands dirty with bribery and corruption allegations, fell by the wayside while those who were able to throw money at their electorates emerged victorious.