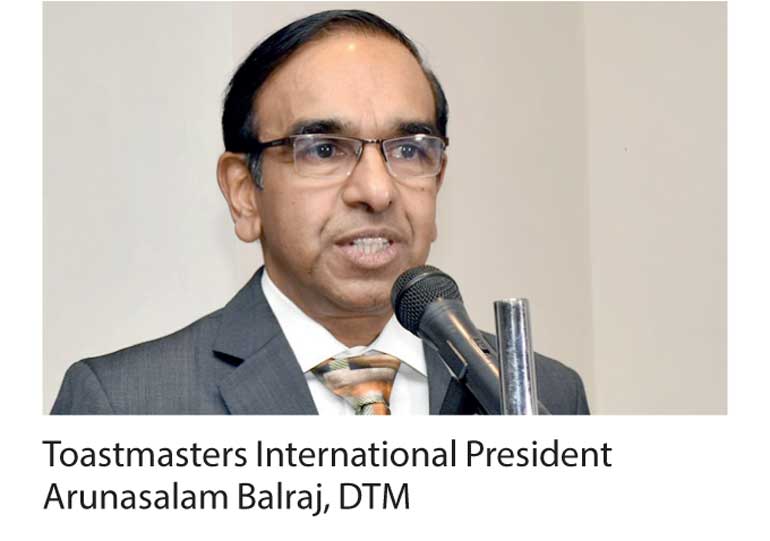 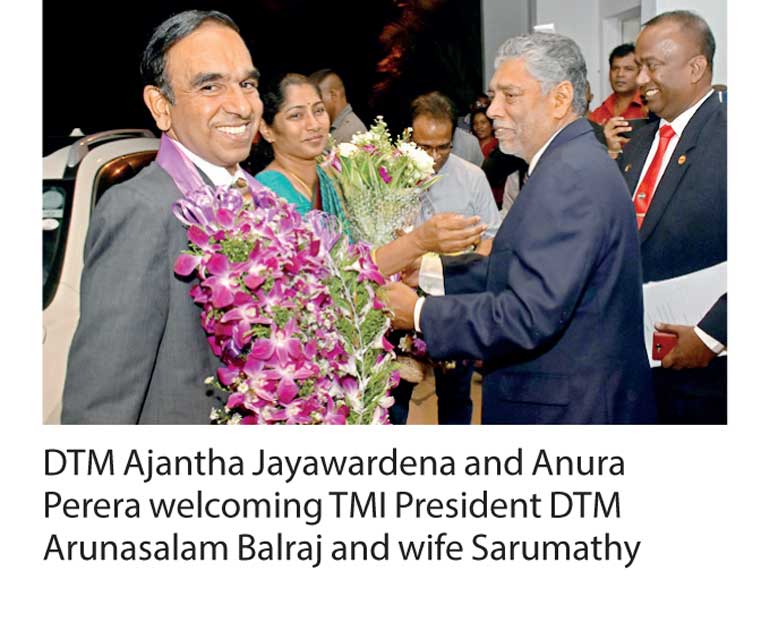 The first-ever Sri Lankan to be appointed as the President of Toastmasters International, Arunasalam Balraj, was given a warm welcome upon his return to the country on Sunday at the Bandaranaike International Airport following the historic development.

Toastmasters International (TMI) is a world leader in communication and leadership development. The organisation has a membership of 360,000 across 16,500 clubs in 142 countries that make up a global network of meeting locations.

District 82 of Toastmasters International comprises 240 Toastmasters clubs, with 6,500 members spread across Tamil Nadu, India and Sri Lanka. The Toastmasters movement in Sri Lanka, which commenced its journey in 1983 with one club, has made significant strides locally and internationally.

A dedicated Toastmaster for 28 years, Balraj is a product of Trinity College, Kandy. He has held numerous offices from the club level to the international level. The roles he has served in include International Director 2011-2013, Second Vice President 2014-2015, First Vice-President 2015-2016 and President Elect 2016-2017.

Balraj is considered the architect of the first District between India and Sri Lanka. Working selflessly towards growing this movement exponentially, his efforts have provided people from all walks of life with an opportunity to ignite their confidence to face the world and its challenges.

Balraj firmly believes in a ‘People First’ attitude. He explains: “My journey to the pinnacle of this movement today as International President is not by chance. It was possible thanks to the belief that the members have placed in me.” In turn, Balraj is passionate about guiding others to find their own personal vision.

Balraj states: “Toastmasters is not just an organisation or a movement, it is a learning laboratory.”

He adds: “This learning laboratory provides members a platform for self-discovery. With the help of a continuous, structured program, members discover their strengths by learning at their own pace.” Toastmasters International has a proven track record of helping members eliminate their fear of public speaking. The program is specially designed to groom individuals into effective leaders.

The growth of the Toastmasters movement is very evident in Sri Lanka’s corporate world.

Many top companies across the island – realising the need for employees to express themselves with clarity – have encouraged in-house corporate Toastmasters Clubs. Balraj says: “We are proud that leading organisations have embraced our program as a platform for learning and development. Several heads of HR also view participation in the program as a Key Performance Indicator of an employee’s success.”

Toastmasters International has continuously evolved with the needs of its members and is all set to launch a brand new syllabus entitled ‘Pathways’. As a program that is relevant to our changing world, Pathways will provide members with an opportunity to identify the skills they wish to enhance themselves and learn from more than 300 competencies. These competencies range from speaking to an international audience to delivering an effective presentation at a company or board meeting.

Balraj is a strong advocate of the belief that leadership training for individuals should start at the grassroots level in schools.

“The children of today are the future leaders of tomorrow, and they will influence the direction of this country. I am proud to state that, in my tenure as International President, we have launched a Youth Leadership Program targeting 1,000 schoolchildren. This is a 10-week course aimed at grooming confident young communicators and leaders from various parts of Sri Lanka. We hope to introduce the same model in other countries as well.”