The Minister of Development Assignments and UNP national list MP Tilak Janaka Marapana PC was sworn in as the new Foreign Affairs Minister a short while ago. 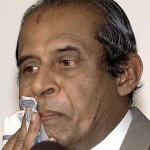 On November 9, 2015, he had tendered his resignation as a Minister of Law and Order. This came after several Cabinet Ministers and civil society leaders expressed their concern on Marapana’s statement regarding the Avant Garde armoury at the Parliament.

“Since an investigation is underway about the Avant Garde issue, I have decided to tender my resignation,” Marapana who was the former Legal Advisor to the Avant Garde Security Service said.