Minister of Foreign Affairs and Lotteries Ravi Karunanayake has refuted all newspapers which carried headline stories today claiming that President Maithripala Sirisena and Prime Minister Ranil Wickremesinghe had asked him to resign from his ministerial post. 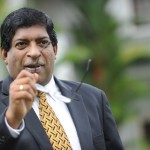 Updating his Facebook status a short while ago he posted a comment which reads “There has been recent media articles stating that the Hon. President and Hon. Prime minister has asked for my resignation. I would like to clarify that there has been no such discussion – Ravi”