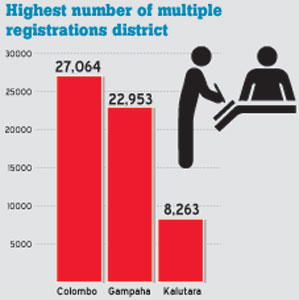 The annual report of the Elections Commission has revealed that according to the 2016 electoral lists 143,902 people had registered their names several times.

The report presented to Parliament recently states that the highest number of multiple registrations was recorded from the Colombo District with 27,064 such registrations, 22,953 in Gampaha and 8,263 in the Kalutara District.

There had also been 5,697 multiple registrations in Jaffna and 3,748 in the Vanni district.

The report said the commission has deleted the name of these persons who had tried to register themselves in several areas from the electoral lists.