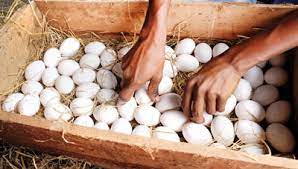 The price revision on eggs would be made through a pricing formula, and that will be taken as a collective decision of the Consumer Affairs Authority (CAA) and the Department of Animal Production and Health (DAPH), DAPH Director General Dr. Hemali Kotalawala said.

She said a decision had been taken by the Committee on Public Enterprises (COPE) committee to introduce a new price formula to determine the price of eggs in the retail market.

From that point onwards, the Animal Production and Health Department will not announce the price revision, instead it will be announced with the decisions of both the institutions in the future, Dr. Kotalawala said.