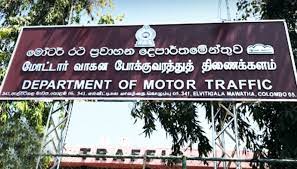 Chief of the Department of Motor Traffic (DMT) yesterday said even the general public should be disciplined to be punctual always, to achieve the best outcome of running an online appointment system to cut down delays in rendering a better service.

“The DMT was a place about few years back that operated from morning to night filled with visitors and workers and renowned for lengthy delays.

But with the introduction of the online appointment system, only a pre-decided number of persons would visit every day and it helps to run a smooth operation,” he said.

Although, this system is successful and functioning well, the fullest cannot be achieved as those who need to obtain their services don’t come on time as stated in their appointment. “Late arrivals always cause hassle to the visitor as well as to the department employees and again create delays,” Mr. Alahakoon said.

The Commissioner General said in future, they will act to turn away the late comers and to make them come on another day with a different appointment.

One thought on “LNP – Public too should be disciplined to be punctual: DMT Chief”