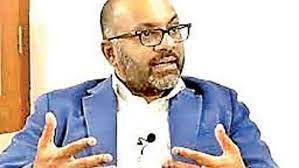 The former Executive Director at the Consumer Affairs Authority (CAA), Thushan Gunawardena is preparing to make more startling revelations even as the heat remains over the garlic scam and gas cylinder issue.

Speaking during a live discussion on social media on Saturday hosted by Daily Mirror and Lankadeepa, Gunawardena said that he resigned from the CAA to spill the beans over alleged illegal activities taking place at a number of Ministries.

He said that by coming out of the CAA, he felt he can do more for the public by exposing illegal activities taking place at State institutions.

Gunawardena said that he hopes to make more revelations at the right time and will submit all the information to the Criminal Investigations Department (CID).

He alleged that the Ministry had on one occasion sought the release of funds for the political work of the subject Minister, which he refused to agree to.

“I came here to implement the policy of the President and not do some private work for any Minister,” he said.

The former Executive Director at the CAA had already created a stir by making revelations on a garlic scam at Sathosa and the threat posed by domestic gas cylinders.

Daily Mirror had first reported on the threat posed by some domestic gas cylinders in the market based on information submitted by Gunawardena.

Gunawardena said that he had also alerted President Gotabaya Rajapaksa and over the threat in May but no action was taken.

The concern he had raised was that the butane-to-propane gas composition in some domestic gas cylinders had been changed.

He had warned that the alleged change in the composition could pose a serios threat to the consumers.

A number of explosions caused by gas leaks in the past few weeks had been blamed on the change in the butane-to-propane gas composition.

Gunawardena said that the recent explosions were not gas cylinders exploding but a gas leak causing an explosion as a result of a spark caused by switching on lights or similar items.

“The public must look into their own safety until something is done about this,” he said.

Gunawardena also said that the Government must recall gas cylinders in the market until proper testing is carried out and the issue is resolved.

One thought on “LNP – Whistleblower to make further revelations”