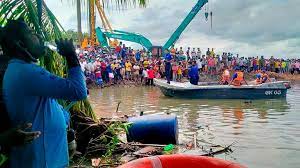 The owner and two operators of the passenger ferry which capsized in the Kuringankerni Lagoon killing six persons were arrested today.

Police Spokesman SSP Nihal Thalduwa said the suspects, residents of Kinniya will be produced to the Trincomalee Magistrate’s Court today.

Six persons including four children drowned and 20 others were hospitalised after a passenger ferry capsized in the Kuringankerni lagoon in Kinniya yesterday.

Meanwhile, the post moterm on the victims was conducted last night and bodies of the deceased were handed over to the families. Police said the burial of the victims were held today.

A 30-year-old woman, her 6-year old son and 3-year-old girl were also among the fatalities.

Two girls in the same family and a 70-year-old man also died in the tragedy.

The ferry was being used to transport people due to repairs being carried out on the Kuringankerni Bridge in Kinniya.