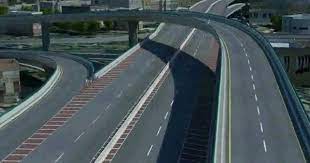 Colombo 02 is at the heart of the city’s real estate drive, with several new developments coming up alongside existing public and private commercial spaces, including the Cinnamon Life Integrated Resort. Due to over 100 gate closures per day, the Coastal Line running across Justice Akbar Mawatha and Uttarananda Mawatha results in daily travel time losses of more than 6 hours. With road traffic disruptions expected to worsen with upcoming developments to the Coastal Line from the Colombo Suburban Railway Development Project, the new flyovers will alleviate severe traffic congestion and provide a timely improvement to traffic flow in the long-term.

The project is implemented by the Road Development Authority (RDA) as part of an integrated traffic management solution for the Slave Island area. Maga Engineering has been contracted to design and construct two flyovers valued at LKR 5.2 billion. The two-lane bidirectional flyover along Uttarananda Mawatha will be 558m in length and the two-lane unidirectional flyover along Justice Akbar Mawatha will be 300m, whilst the connecting branch flyover will be 288m in length. The superstructure will be made of concrete box-girders, whilst the substructure will comprise concrete piers and pile foundations. The project will also involve improvements to junctions, bridges, byroads, culverts, drainage and other retaining structures. The project team will work alongside the Beira-lake watercourse in the heart of the city, whilst minimizing disruption to traffic and navigating a congested layout of existing utility lines.

Commenting on the project, Chief Executive Director of MAGA Mr. Piyadasa Madarasinghe stated “The project is scheduled for completion by mid-2022, requiring its delivery in record time. In order to achieve this target, we are leveraging our in-depth construction experience in constructing major bridges and flyovers, involving innovative construction methodologies and intricate coordination. The road network in this area connects the rest of Colombo with its economic hub (Fort and Pettah) and its coastal region (Galle Face and Colombo Port City), therefore the project will bring great dividends once completed. We are proud to partner with the Ministry of Highways and RDA and contribute to the vision for a modern and accessible Colombo city.”

Maga Engineering is Sri Lanka’s largest construction company and a key partner in national infrastructure development. MAGA has been involved in delivering a number of bridges and flyovers, including the Japan Friendship Bridge (formerly known as the Victoria Bridge), Kalladi Bridge, Ginganga Bridge on the Southern Expressway, Hambantota Siribopura Flyover, and the Baseline Road Flyover.