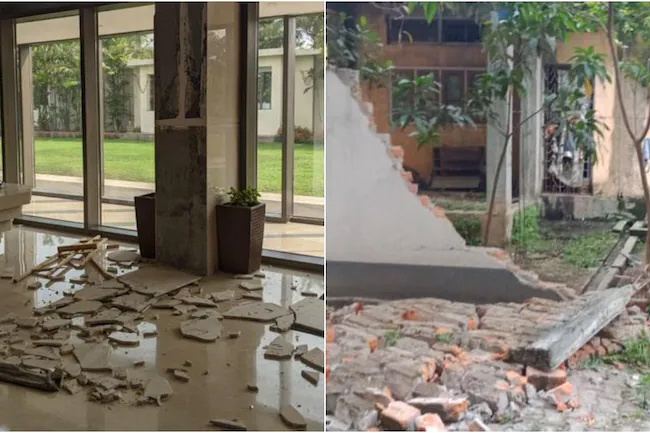 An earthquake of magnitude of 6.7 on the Richter Scale hit Sonitpur, Assam in India on Wednesday at 7:51 am, the country’s National Center for Seismology (NCS) confirmed.

The quake hit at a relatively shallow depth of 10 kilometres. The epicentre of the earthquake was 36 km west, northwest of Assam’s Tezpur at Dhekiajuli, the NCS said.

“Just experienced a massive earthquake in Assam. Waiting for details,” Assam Health Minister Himanta Biswa Sarma tweeted along with photos of broken walls inside a building and of a broken boundary wall.

Assam CM Sarbananda Sonowal later said: “Big earthquake hits Assam. I pray for the well-being of all and urge everyone to stay alert. Taking updates from all districts.”

“This is one of the biggest tremors I’ve felt in my lifetime. There was a second one 10 minutes after the first tremor,” Kumar Sanjay Krishna, Former Chief Secretary, said.

Earlier on April 5, an earthquake measuring 5.4 magnitude on the Richter scale struck near Sikkim-Nepal border on Monday night. The epicentre of the earthquake was 25 km east-southeast (ESE) of Gangtok, Sikkim, according to the NCS. Tremors were felt in parts of West Bengal, Bihar and Assam.