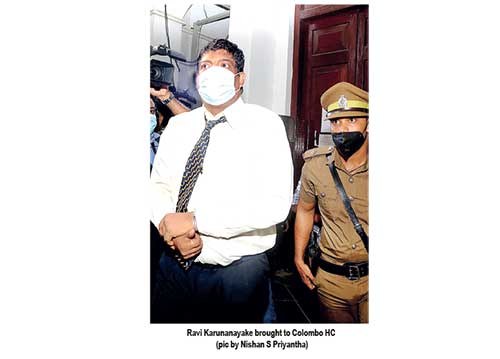 A three-member bench of the Colombo High Court yesterday (17) remanded eight persons, including former Finance Minister Ravi Karunanayake, over the alleged criminal misappropriation of Rs 36.98 bn at the Treasury bond auction on March 29, 2016.

The suspects were remanded till March 23.

Deputy Solictor General Haripriya Jayasundera, who appeared for the Attorney General, said there was a likelihood of the suspects absconding in case they were granted bail. Jayasundera said that the second and third accused in the case were the then Finance Minister Karunanayake and former Central Bank Governor Arjuna Mahendran. The accused had allowed another party to earn a massive sum of money through illegal means by neglecting their responsibilities.

Shavendra Fernando, PC, who appeared for the accused said that as AG had failed to indict them on specific charges it would be unfair to remand them pending the court case. Fernando said that the request made outside the accepted norms was unfair.

Responding to Shavendra Fernando, the bench acknowledged that the accused hadn’t been indicted.

Anil Silva, PC said that the stand taken by Jayasundera that the court required the consent of the AG to grant the accused bail was an interference with the court. He said that the court should not give in to AG Department’s bid to deprive selected group of persons bail.

Of the three judges, Manjula Tillekaratne took a different stand.