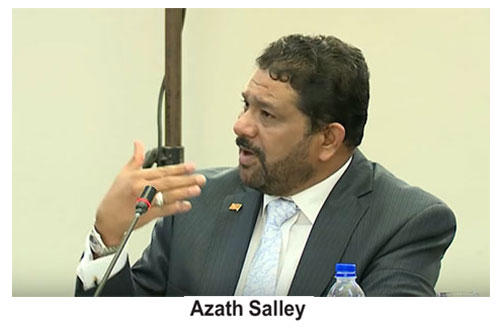 Over alleged intervention to secure release of terror suspects

A team consisting of an ASP of the CID yesterday evening arrested National Unity Front leader and former Western Province Governor, Azath Salley. Police Media Spokesman DIG Ajith Rohana said Salley had been taken into custody near his residence in Colpetty under the provisions of the Prevention of Terrorism Act.

The arrest had been made on the advice of the Attorney General, his coordinating officer State Counsel Nishara Jayaratne said.

Public Security Minister Rear Admiral (Retd) Sarath Weerasekera said that the Attorney General had instructed the police to arrest Salley over his intervention to protect Islamic extremists following attacks on some Buddha statues in Mawanella. Salley also allegedly intervened to secure the release of two key suspects who arrested with explosives at the Wanathawilluwa Jihadist training camp. Salley has denied the allegation.

A separate investigation was launched by the CID two days ago into a recent statement made by Salley that he would accept only sharia law.

DIG Rohana said that several parties had lodged complaints with the CID against a controversial statement made by Azath Salley, and investigations are being carried out into his statement and the statements made in social media.