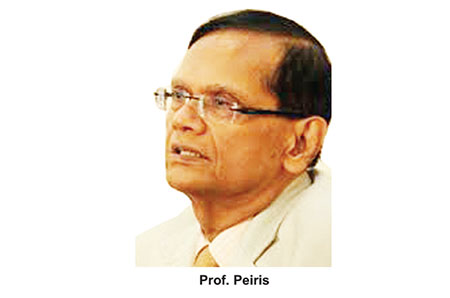 SLPP Chairman and Education Minister Prof. G.L. Peiris yesterday (22) stressed the responsibility on the part of the government to consult Archbishop Malcolm Cardinal Ranjith as regards action to be taken on the basis of the Presidential Commission of Inquiry (P CoI) report on the 2019 Easter Sunday suicide attacks.

About 270 perished in six suicide attacks and one accidental blast caused by the National Thowheed Jamaat (NTJ) in Colombo, Katana, Batticaloa and Dehiwala. Over 500 persons received injuries.

Prof. Peiris said that the Cardinal’s views on the matter as well as his proposals would be of pivotal importance. The SLPP Chairman said so at the weekly media briefing at Nelum Mawatha party office. The minister acknowledged that there could be some turmoil due to government actions. Therefore, the issues at hand had to be discussed with Maha Sangha and leaders of other faiths as well, the minister said, underscoring the resultant threat to national security.

Sirisena’s successor, President Gotabaya Rajapaksa gave the go ahead for the P CoI to continue the inquiry in the wake of the Archbishop of Colombo accepting it.

The SLPP Chairman pointed out that the PCoI inquired into various aspects, including who provided the wherewithal to the attackers. However, the government would have to take necessary measures to thwart similar attacks in the future, the minister said.

One-time External Affairs Minister said that the counter measures would have to be discussed and adopted on the basis the post-Easter Sunday situation affected the entire population not only the Catholics.

Minister Peiris said that the timely intervention made by the Cardinal prevented a bloodbath in the wake of the Easter Sunday attacks. The country would have been plunged into crisis, the minister said, acknowledging the need for consultations among all stakeholders before the government acted on the P CoI report. Prof. Peiris explained that actions taken by the government to prevent recurrence of such attacks wouldn’t infringe on the P CoI report.

The SLPP Chairman on behalf of the government offered to discuss the P CoI report with the Cardinal subsequent to the Catholic leader flaying the government over the appointment of a six-member ministerial committee to study the report. Malcolm Cardinal Ranjith over the weekend declared that the Church didn’t recognize the ministerial committee. The Catholic leader, having participated at a protest organized at Katuwapitiya church, the scene of the worst Easter Sunday suicide attack, bitterly complained that he was yet to receive a copy of the P CoI report though he asked for one. The Cardinal declared that he wouldn’t meet lawmakers until the matter was resolved.

The Catholic Bishops’ Conference the supreme decision making body of the Catholic Church, Sri Lanka is yet to make its position known on the issue at hand.

Prof. Peiris told The Island that the issue at hand had to be settled amicably. Sources said that the UNP and its breakaway faction, the Samagi Jana Balavegaya (SJB) responded as if their government hadn’t anything to do with grave security/intelligence lapses that led to Easter attacks.

The minister dismissed accusations that the government wanted to hide sections of the report and exploit the dossier for political advantage. The minister alleged that those who had created an ideal environment for NTJ to strike by causing instability in every sector now played politics with the issue.