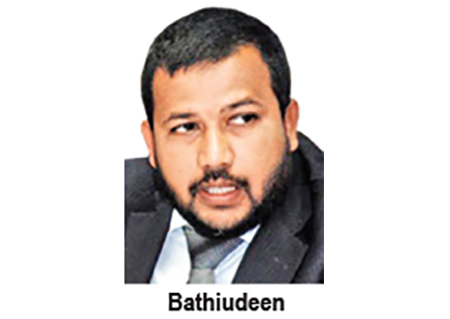 Bathiudeen to appeal against court decision

The Forest Conservator General has estimated the cost of restoring a section of the Kallaru Forest Reserve, which suffered extensive damage due to the establishment of a village, at Rs. 1.07 billion. The Court Appeal has ordered that SJB MP Rishad Bathiudeen, responsible for clearing part of the forest reserve bear the total cost of the reforestation programme.

Sources close to Bathiudeen said he would file an appeal against the Appeal Court decision in the Supreme Court in the coming days.

Commenting on the estimate, Attorney-at-Law Ravindranath Dabare, who filed the petition in 2015 challenging the destruction of a section of the forest reserve said that they were ready to accept the calculation if the Forest Conservation Department felt it could replant the cleared forest area with that estimated sum.

The court also ordered the Conservator General, Department of Forest Conservation to take action against the illegal removal of the forest cover and illegal re-settlement of IDPs.

Dabare also said that Bathiudeen had the right to appeal but they were ready to go on fighting until those who destroyed a section of the forest were made to pay for what they had done.

The Forest Conservator General was then ordered to calculate the costs of the tree planting programme and inform Bathiudeen of the expenses within two- months after delivering the judgment. Bathiudeen has to pay the sum calculated by the Conservator General within one month after he is informed. Bathiudeen has to bear the full cost of the tree planting programme under the polluter pays principle since according to the evidence before Court he was instrumental in using the reserve forest land for the resettlement of the IDPs.

The judgment was delivered by the Court of Appeal two-judge bench comprising Justices Janak de Silva and Nissanka Bandula Karunaratne.

The petition filed by the Center for Environmental Justice (CEJ) said that around 1500 Internally Displaced Persons (IDPs’) families had been illegally settled in Kallaru sanctuary area in violation of the Forest Conservation Ordinance.

Delivering the order the two Justices said that Section 7 of the Forest Conservation Ordinance (as amended by Act No. 65 of 2009) prohibited fresh clearing, clearing or breaking up any land for cultivation or any other purpose, erection of any building whether permanent or temporary or occupation of such building and constructing any road in a reserve forest.