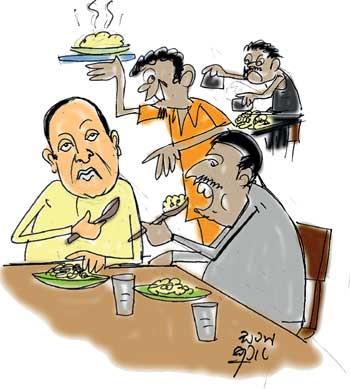 Kottu Roti is a popular food item served in hotels and restaurants.

By the way, a certain purohita of the government had recently referred to a new kind of Kottu called ‘Police Kottu’.
The other day, this purohita had gone to a hotel with a group of buddies and after placing an order for Kottu with the waiter he had told his buddies: “We must listen how the waiter will deliver the order!”

Surprised buddies had asked the purohita: “Why should we listen, Amatituma?”

“In my area some khaki men who enjoy Kottu at some eating houses had reportedly made it a practice to walk out coolly without paying the bill.

When this had become an unceasing problem, the owners had hit upon a method to serve a cheaper variety of Kottu. They had got the Kottu makers to prepare Kottu with the day’s leftovers as well. And they had named the Kottu made this way as ‘Police Kottu’!”

“How did you find this out?” the buddies had asked.

“It was none but an owner of an eating house who told me this,” he had replied.