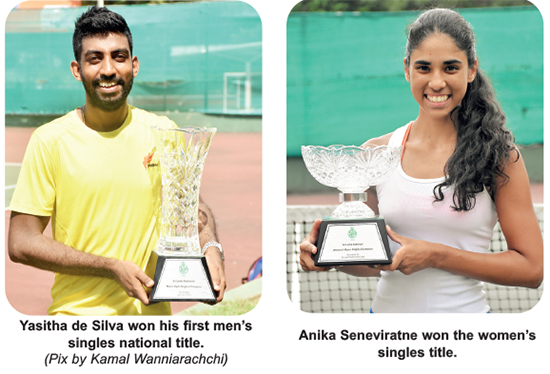 Yasitha de Silva won his maiden men’s singles title as defending champion Sharmal Dissanayke withdrew after a closely contested first set due to injury in the finals at the 2020 Tennis National Championship at the Sri Lanka Tennis Association courts on Sunday.

De Silva won the first set 7-6. Dissanayake who was seeking his fifth consecutive singles title had to retire due to injury after the first set.

The 25-year old De Silva, reached the semi finals at the last edition but was eliminated by Pakistan’s Heera Ashiq denying him the chance to meet number one ranked Dissanayake.

Seneviratne won her first national title at the 2018 edition but was eliminated in the semis by eventual champion Anjalika Kurera at the last (2019) edition.