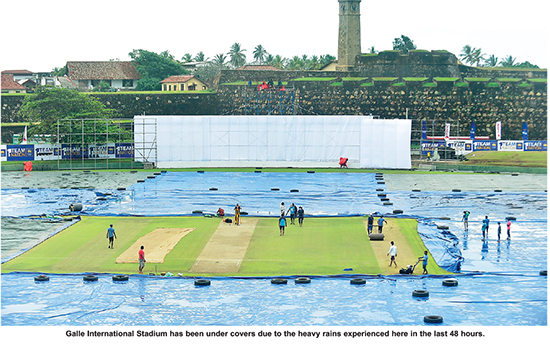 Sri Lanka’s final training session yesterday ahead of the Galle Test was cancelled as a heavy downpour kept the players indoors and the hosts will be going into today’s opening game against England slightly under prepared.

England have spent more time in Sri Lanka this year than the hosts as they were involved in the New Year Test in South Africa. So the tourists are slightly better prepared than Dimuth Karunaratne’s side.

Weather predictions for today looks good, but those forecasts should be taken with a pinch of salt.  Putting your trust on weather predictions is like expecting Ranil to keep his word and step down as party leader.

England used to have a wretched record in Galle and the venue used to be a Sri Lankan fortress. The extreme heat and tracks that are turning square have seen them losing here by record margins, usually inside three days.

But the tourists turned things around last time they were here winning the Test match by a massive 211 runs. That set the tone for rest of the series as England went onto whitewash the hosts 3-0. It helped asTrevor Bayliss was England’s Head Coach. The Australian was Sri Lanka’s coach for four years and knew the conditions well.

Sri Lanka were so disorganized in that series that wheels were coming off fast. At one point, they had exhausted all their reviews before their best bowler – Rangana Herath came onto bowl. Usually, Herath is onto the attack before the tenth over.

Those are lessons that Sri Lanka have learned and need to show more discipline and discretion this time around.

Sri Lanka had almost decided on their playing eleven 48 hours before the Test match but those plans will be now discussed again this morning. The pitch would have been under cover for considerable hours by the time the captains walk in for the toss but that shouldn’t deter the Sri Lankans from fielding three spinners.

Former  captains Angelo Mathews and  Dinesh Chandimal are expected to return to the side following injuries. Although Suranga Lakmal and  Oshada Fernando have recovered from their injuries, they are unlikely to feature in today’s game.