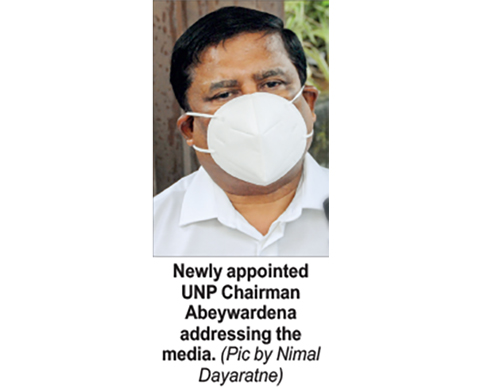 No decision yet on NL slot

The WC met at Sirikotha under the leadership of UNP leader Ranil Wickremesinghe. The meeting lasted for about one hour.

Abeywardena succeeded Kabir Hashim, who switched his allegiance to the then UNP Deputy Leader Sajith Premadasa in the run-up to the last parliamentary polls in August 2020, which they contested from the new party they formed, the Samagi Jana Balavegaya.

Premadasa now leads the breakaway UNP faction SJB, which was immediately recognised by the Election Commission.

Sagala Ratnayake did not contest the last general election.

Interestingly former MP Navin Dissanayake, who served as the National Organizer of the party is not among those who received appointments yesterday. Former Assistant Leader Ravi Karunanayake, too, had been left out, political sources said, pointing out that former minister Dr. Rajitha Senaratne was also not among the recipients of positions in the party.

Abeywardena, the first UNPer from the South to receive the Chairmanship entered parliament in 1994 after having served three terms as a Southern provincial Councillor since 1988. Abeywardena retained his parliamentary seat till his defeat at the last general election in which the party failed to win a single seat. The UNP is yet to reach consensus on its single National List slot.

Political sources said that the post of the National Organizer remained vacant and there was likelihood of the party reaching an understanding with the former minister Navin Dissanayake????. Sources said that in spite of some disagreements, efforts to re-build the party were continuing.