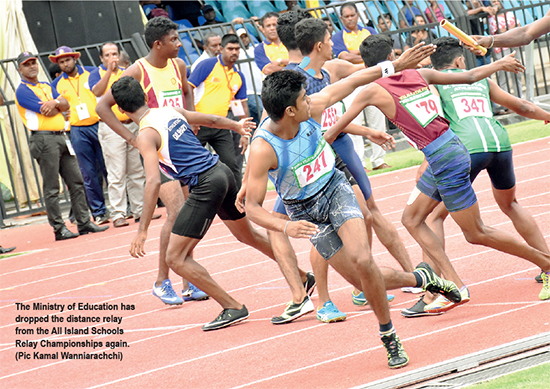 Sports authorities of the ministry have also disregarded numerous requests to include the 4×800 metres relay into the Under-16 age category.

The decision to scrap the distance medley relay comes as a surprise as the organizers of the last edition were determined to reintroduce the event to the Under-20 age category as well following the success of the event in the Under-18 age category at the 2019 edition.

The distance medley relay was reintroduced to the programme in 2019 after many schools nurturing athletes for long distance events made requests to include it.

Sports Authorities of the Ministry of Education have given scant regard to endurance events, despite local athletes proving potential to impress at regional international events in the 800 metres and long distance events as of late.

Currently the country’s top three 800 metres runners in the women’s category occupy top positions in Asian rankings. Sri Lanka’s women’s 800 metres specialists Nimali Liyanarachchi, Gayanthika Abeyratne and Dilshi Kumarasinghe are currently ranked third, fifth and sixth respectively in Asian rankings. In 2020 the trio were responsible for producing the second, third and fourth fastest times in the Asian region. Currently the only athlete to have come closer to booking a berth at the Tokyo Olympic, Nilani Ratnayake, is also a distance runner.

Currently the athlete who is closest to achieving entry standard for the World Under-20 Athletics Championship, Shanika Lakshani is also a distance runner having 800 metres as her pet event.

The country’s highest achievement at the 2017 Asian Youth Athletics Championship (Under-18) came in the 800 metres when Harsha Dissanayake won a silver.

Sri Lanka’s only Youth Olympic medalist, Paarami Wasanthi won her medal at the Buenos Aires Games in 2018 in a long distance event, the 2000 metres steeplechase.

The Sports Authorities of the Ministry have made changes to the lower age category competitions removing the points system and introducing merit standards to issue certificates instead of recognizing the first second and third positions of events in the Under-12 and under-14 age categories. That has been cited by some as the only positive move the authorities have made.

Sources close to the Education Ministry said that there had been numerous requests to introduce middle and long distance events to the schools track and field programmes. Such requests includes introduction of the 3,000 metres to the Under-18 age category. Currently the 3000 metres event is competed in this age category at the Junior National Championship conducted by Sri Lanka Athletics and the Sir John Tarbet Senior Championships conducted by Sri Lanka Schools Athletics Association. But the Ministry of Education has continued to give a wide berth to long distance events.

The absence of long distance relays will badly affect schools and coaches promoting long distance events among athletes largely hailing from outstations. Many coaches and school officials promote All Island Schools Relay Carnival among their athletes to keep them interested in track and field as the event encourages team spirit and provides the second string a rare opportunity to win medals alongside prominent athletes.