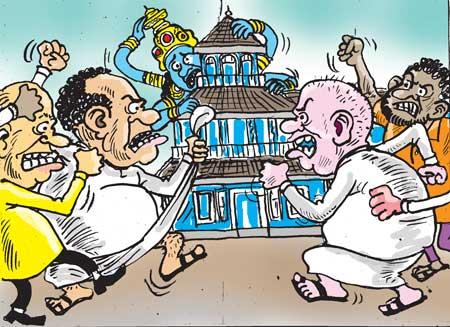 Government authorities fixed a date for electing a Basnayake Nilame for a highly popular Devalaya in the deep South on the request of the political chief of the province.

Later, it was rumoured that a close associate of the provincial political chief had decided to contest for the much-coveted post. Meanwhile, a person from a leading business family backed by a popular young public figure too entered the fray.

No sooner the news that a keen contest for the post was in the making, took wings, than had rumours begun making rounds that those having the voting right were being offered money and other gifts and were also being pressured to the point of harassment. When the contest took an ugly turn, some leading politicos in the province made an appeal to Number Two to postpone the election.

Later, a government announcement said that the proposed election of a Basnayake Nilame had been postponed owing to the coronavirus situation in the country.