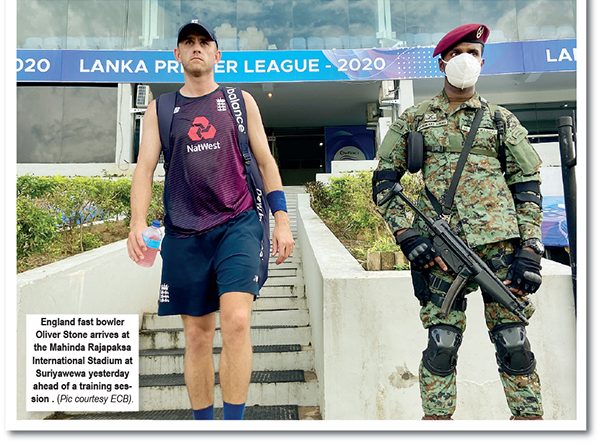 There was good news coming from the England camp in Hambantota yesterday after PCR tests done on the team turned negative for COVID-19 except for Moeen Ali. The all-rounder had tested positive for the virus on arrival at Mattala and he is currently in isolation. England Media Manager Danny Reuben told The Island that Chris Woakes, a close contact of Moeen had tested negative but will continue to isolate in his room.

Moeen will be in isolation for ten days and he is expected to be available for selection for the first Test match scheduled to be played on the 14th in Galle.

Sri Lanka will return home from South Africa on the 8th to prepare for the series. While fast bowlers Kasun Rajitha and Dananjaya de Silva have been ruled out due to injuries that they sustained during the opening Test against South Africa at Centurion, other injured players are expected to be available for selection.

Kusal Mendis who had a wretched run against the Proteas picking up three ducks in a row is expected to be axed.

Dinesh Chandimal, Suranga Lakmal, Oshada Fernando and Lahiru Kumara have resumed training in South Africa and will be available for selection.

The extended Sri Lankan squad will comprise of 23 players and the likes of Angelo Mathews, Ramesh Mendis, Nuwan Pradeep, Avishka Fernando, Roshen Silva and Lakshan Sandakan are expected to feature in the two match series.

With the England Tests, international cricket will return to Sri Lanka after the pandemic forced the cancellation of several bilateral series and the Asia Cup last year. The England Tests were to be played in March last year and Joe Root’s side was in Sri Lanka for more than two weeks preparing for the series. However, they were forced to return home days before the opening Test due to the pandemic.

SLC is expected to host Bangladesh in March and other postponed series against South Africa and India also will take place this year.