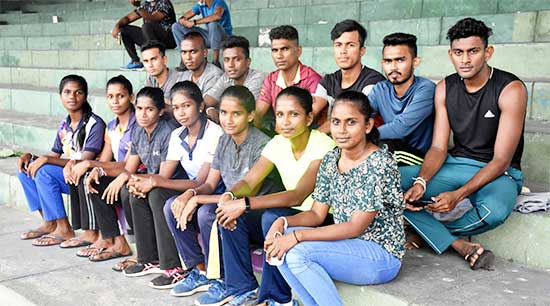 Hailing from a not so well to do family from Gampaha, Shanika Lakshani had many an obstacle to overcome before she shattered the 35 year old Junior National record held by Dammika Menike at the last month’s National Athletics Championships. Probably the most challenging one was the Covid 19 forced lockdown strictly enforced in the Gampaha District following the outbreak of the second wave of the pandemic. According to her coach Madura Perera who has been training a team of nearly 30 athletes, months of hard work behind preparing athletes for the National Championship, would have gone wasted if not for the extra effort taken to continue training amidst the pandemic.

“Unavailability of training facilities was the biggest obstacle during the pandemic. With grounds and training facilities shutdown it was difficult to continue training. I and Chandana Amarasinghe requested support to conduct residential training at the Subodhi Ground, Gampaha so that training could continue without interruption. Our request was given special attention to by the Additional District Secretary Sugath Kithsiri, who got the approval from health authorities to conduct training,” said Perera who considers it as one of the cornerstones of the success of his team.

At a time when sport is not high in the agenda of many government officials, the support given by the Additional District Secretary of Gampaha is highly commendable.

“He not only gave us permission but also found couple of sponsors to look after the extra nutritional needs of athletes. It was athletes who bore the costs of food but Mr. Sugath Kithsiri went out of his way to help us reduce costs,” said Perera.

Perera said that the residential camp has also helped him address nutritional issues of some athletes. He said it wouldn’t have been possible had they been taken care of by their parents.

Many athletes give up sports due to the negligence of authorities. Support does not only mean big time sponsorships as it is proven in the case of Perera’s team. The support given by the government official was crucial in Shanika reaching the standard to break the more than three decades old junior national record. She not only broke the record but also came almost close to achieving entry standards for the World Under-20 Championships in two disciplines. It was a huge confidence boost for junior athletes who not only missed competitions but also training opportunities during the pandemic.

Madura Perera is confident that Shanika Lakshani would reach entry standards for the World Junior Championships during the next few months.

While Shanika Lakshani hogged limelight breaking a junior record, there were few other athletes trained by Perera who had their own success.

Triple jumper Sandun Krishantha, steeplechase athlete M.S. Sewwandi, long distance runner Dilhani Liyanage and hurdler Lahiru Sampath are among the other athletes who have impressed in their pet events at other national level competitions.

At a time when the contribution of sports officers for the development of sports is questioned, the way this team has overcome barriers is exemplary.