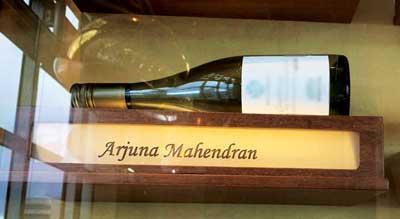 While our Police sleuths are still on the trail of the evasive main accused in the Treasury Bond scam, one may be surprised to hear that the quarry of the months-long man-hunt has surfaced in a club in the City of the Lion, where he has gone underground.

Not the quarry in person, but his name in a prominent manner!

A picture taken by an anonymous shutterbug, who had visited the club recently, displays eight bottles of wine of apparently different brands showcased with the name tag of a ‘celebrity’ underneath each of them. And one of the ‘celebrities’ is none other than the main accused in the Treasury Bond scam!

One may wonder, no doubt, if our Police sleuths had visited this club, they could have come upon a valuable clue to the evasive man’s present whereabouts!