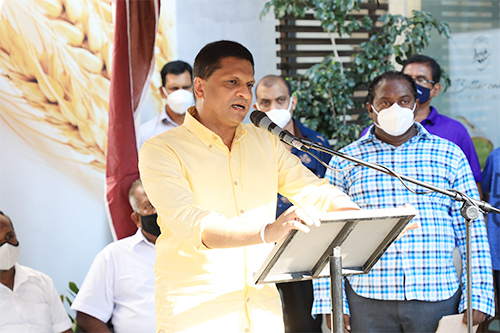 Nimal Lanza, State Minister for Rural Roads and Residual Infrastructure said that the present government has implemented development activities in every electorate fulfilling the expectations of the people.

Minister expressed these views while inaugurating the development work of the Ragama Zoysa Housing Circle Road.

‘The present government which came to power after Gotabhaya Rajapaksa became the President has accelerated the development activities of the country in a short period of time. The development of infrastructure facilities including electricity, water, housing, roads, which are essential services to be provided to the people, has commenced. All of this is being done at a time when the economy is being hit hard by the Covid 19 impact, and in an economy where good governance has reduced economic growth from 7 percent to 1.8 percent.’

Talking about road development, the development of 100,000 km of rural roads, the construction of the Central Expressway which was stopped halfway, the construction of the Ruwanpura Expressway, the Warakapola by road which will be constructed to reduce traffic congestion, the bridge that will be built on poles across the Nawala canal, the reduction of traffic congestion, other by-roads and alternative roads, flyovers, tunnels, car park construction as well as rural bridge projects can be pointed out. ‘It should be noted that all these development activities are carried out while protecting the environment.’

‘Despite the current situation, the government intends to implement other development activities, including road development, in a planned manner to meet the development needs of the people of the country by following the health guidelines. Over the next four years, we will work to fulfill the promises made to the people under the Vision of Prosperity national program. He further stated that the aim is to ensure that the people inherit the benefits of development irrespective of party affiliation, race or religion, Lanza said.