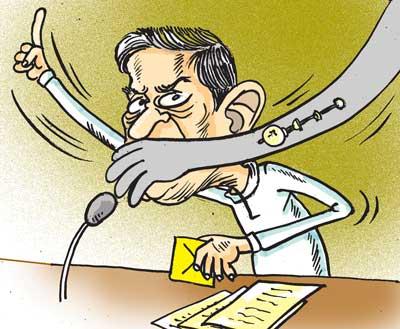 On the day the vote on the 20A was taken, some Diyawanna members behaved like children, they say.

A government national list member, a first timer by the way, for example, had kicked up a big row shortly before the voting time saying that he had not been allotted sufficient time to speak.

In fact, this member had asked for more time despite being given 12 minutes when all others had been given 10 minutes each.

He had told the chief whip Jonnie, “Give me more time to speak or I will not vote for it!”. Having made this threat, he had gone to the library and remained there for some time.

Later Jonnie complained about this threat to Number Two.

“Ah! He will not vote for it because he has not been given enough time to speak? Tell him that we have got enough votes and ask him to remain there, if he wants!” was Number Two’s prompt reply.

Jonnie, thereafter, went back to the library and told the member, “If you don’t want to vote for it, you had better remain here. We can easily manage without you!”

The member finding that his absence would make no impact, returned to the chamber on time to vote for the 20A, they say.