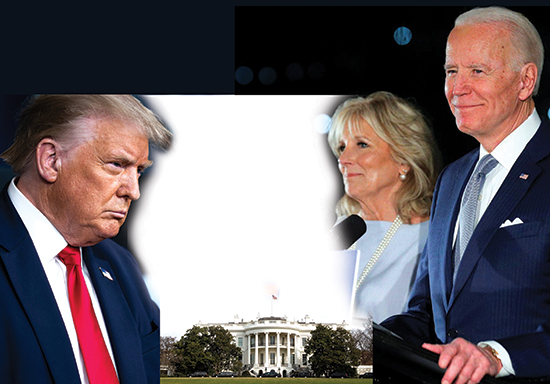 Five States to decide their fates

Democratic candidate, Joe Biden, was leading in the US presidential race with several key battleground states being balanced on a razor’s edge, at the time this edition went to press. The US media continued to announce different results based on information that was coming in and their analyses thereof.

According to the officially declared results, Biden had secured 243 electoral votes by yesterday evening as opposed to President Donald Trump’s 214.

Speculation was rife that Trump’s path to victory was narrowing with the number of Biden’s electoral votes rising steadily, but the Republicans were hoping for a comeback with the results in some of the Rust Belt states, where they were confident of victory.

Biden has broken Barack Obama’s polls record in 2008. Obama polled more than 69.5 million votes in the first presidential contest he faced, and Biden had already secured more than 73.3 million votes by yesterday afternoon.

A presidential candidate has to obtain at least 270 out of 538 electoral votes to secure the presidency in the first round. The outcome of the nationwide popular votes does not matter.

The race was tight in Georgia, Pennsylvania and Arizona. Some media outlets had already called those states depending on their information, but the Federal Election Commission had not confirmed those results.

With the counting of delayed mail-in ballots still on, it is expected to take some more time for the final outcome of the presidential race is to be known. The Democrats were preparing for celebrations.

President Trump declared himself the winner prematurely though many states had not been called, and threatened to have the counting of mailing ballots that had arrived late stopped. He claimed a fraud was being perpetrated on the American voters. He announced his intention to take the election to the Supreme Court. Political observers said he had ‘an army of lawyers’ ready. He has drawn severe criticism from the Republicans as well as some Democrats for his action.