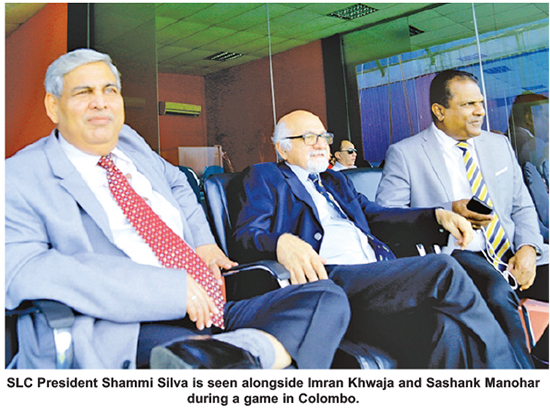 Amongst us live politicians who fail to see the broader picture. Developing nations mostly suffer due to short sighted decisions taken by our leaders. Politicians have some wonderful examples to follow in cricket – Sashank Manohar was one of them. A leading lawyer in Nagpur, the former President of Indian Cricket Board became the first independent Chairman of the ICC in 2016. He took some unpopular decisions including abolishing of the Big Three concept.  He won re-election in 2018 unanimously. Manohar didn’t seek a third term and the position fell vacant in June this year.

Khwaja is a lawyer by profession. His rise in cricket has been impressive as he doesn’t come from a Full Member country. He joined the ICC board as a representative of Associate Members and soon became very popular and currently he is ICC’s interim boss after Manohar stepped down.

It is said that Sri Lanka Cricket is yet to decide on whom to vote. The Board will be represented by President Shammi Silva who will cast the vote for next ICC Chairman. Khwaja is a good choice for a variety of reasons.

Khwaja’s thinking is similar to Manohar having opposed the Big Three concept. Him becoming the ICC chief ensures a fair distribution method of ICC finances unlike what former Chairman N. Srinivasan had supported – a large chunk going to the Big Three with India taking the lion’s share.

Also Khwaja is an advocate of an extra ICC event in a four year cycle which gives an opportunity to stage an event such as Champions Trophy. Why this is important for smaller boards like Sri Lanka is that it brings them more revenue. Barclay believes in the opposite – more bilateral cricket – which allows India, Australia and England to play frequently between them.

Barclay is a lawyer as well. The biggest advantage he has is support from India.  SLC has a history of voting with India. It remains to be seen what they will do this time around. This will be a secret ballet and there are 16 votes. The winner needs a two third majority – 11 votes.