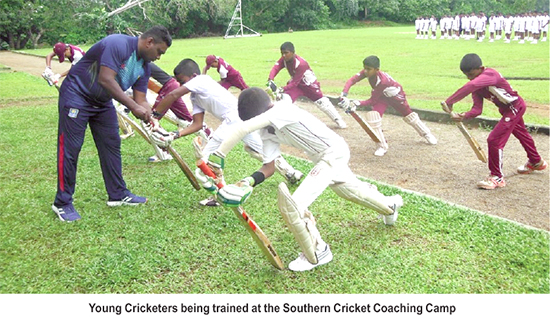 Tokyo Cement Group pledged its support to the Foundation of Goodness for another year, to extend their multi-prongged activities aimed at rural cricket development. 2020 marks the fifth year of partnership between the two organizations, who have united to unearth talented young cricketers from rural Sri Lanka.

The Company’s long-standing partnership with the Foundation of Goodness (FoG) established cricket training facilities, that included upgrading two school grounds in Hikkaduwa and Seenigama, to undergo formal cricket training. Hikkaduwa Sri Sumangala MCC Lords and Seenigama Sri Wimala Buddhi Surrey Oval, are the two cricket grounds that are managed and operated by FoG under the patronage of Tokyo Cement Group, where regular training sessions are held. Budding school cricketers in the area are welcomed to enroll themselves for regular Cricket Coaching Camps conducted free of charge by reputed coaches at the two training centers, that have indoor and outdoor practice nets.

Founded on the vision of Kushil Gunasekera, Founder/Chief Trustee of the Foundation of Goodness, the Tokyo Cement Group’s partnership intends to make a positive impact on the lives of talented young cricketers from remote backgrounds who have very limited access to quality training facilities to pursue their dreams. Anura de Silva, Director of Sports at the Foundation of Goodness heads the Cricket Academy together with a pool of coaches and qualified physical trainers. The special monthly training sessions are conducted by renowned cricket coach Hemantha Devapriya, a former Head Coach of Sri Lanka’s National Ladies’ Cricket Team, with his team of cricket coaches. From time to time, the Academy gets the service of famed local and international cricket stars who get involved in the program on a voluntary basis.

Since inception, the Academy has so far trained over 1,100 promising young cricketers from nearly 20 regional schools in the area. The program also conducts an elite coaching camp for star performers, where they get to hone their innate talents under specialized supervision. The Southern Coaching Camps produced several top-notch National U19 Players who now represent various Division I clubs in the country. In August 2017, the partnership extended the Cricket Coaching Camps to the North and East, conducting programs in Jaffna, Killinochchi, Oddusuddan, Mankulam, Mullaitivu, Vavuniya, Mannar, Batticaloa, Kalmunai and Ampara, to unearth young cricketing sensations.

Speaking on the impact the Cricket Academy makes on the lives of young school boys and girls, Anura De Silva pointed out that, having access to top quality training facilities under the wings of world class coaching expertise is itself a great contribution to uplift the future of Sri Lankan cricket. He also said the success of the Academy lies in allowing these novices to maintain and polish up their natural style in either bowling, batting or fielding, so that they grow in confidence, as much as in their skill while undergoing the coaching program.

The number of cricketers who have risen from District / Provincial level to various National-level teams speak volumes for the Academy’s ability to unearth unique cricketing talent. Among them is Navod Paranavithana who is the Sri Lanka U-19 World Cup opener and captain of the Mahinda College Cricket Team, Galle, who shattered the batting records by becoming the first schoolboy to score a quadruple century in a school match. Navod joined the Cricket Academy at U-13 level and is a recipient of a MCC Cricket scholarship offered through The Foundation of Goodness. Kavisha Dilhari is another 17-year-old cricketing prodigy hailing from the Academy, who created the record as the youngest school girl cricketer to score a triple century at school level and also became the youngest person to represent Sri Lanka as part of the National Ladies Cricket Team. Furthermore, four young cricketers from the Seenigama Ladies Cricket Squad were selected to play for Sri Lanka at the Women’s Cricket World Cup 2020 in Australia.

With the extension of the partnership this year, Tokyo Cement Group and the Foundation of Goodness will continue the training sessions that gives schoolboy and schoolgirl cricketers the chance to hone their dormant skills. During this year, FoG has completed 12 coaching camps in the South, maintaining the training momentum of the players while looking after the facilities in their top condition, despite the many disruptions that occurred. Anura and his team of FoG coaches, together with Hemantha Devapriya and his team of coaches remain fully committed to this far-reaching initiative with the patronage of Tokyo Cement Group, whose objective is to provide the youth new opportunities to polish up their talent in the game of cricket. The Foundation of Goodness conducts a wide range of holistic development programs aimed at bridging the urban rural gap, that touch the lives of over 31,500 beneficiaries annually, free of cost, from over 400 villages island-wide. The two organizations united their forces in this endeavor with the shared objective of creating foundations for the future generations to become well-rounded leaders.