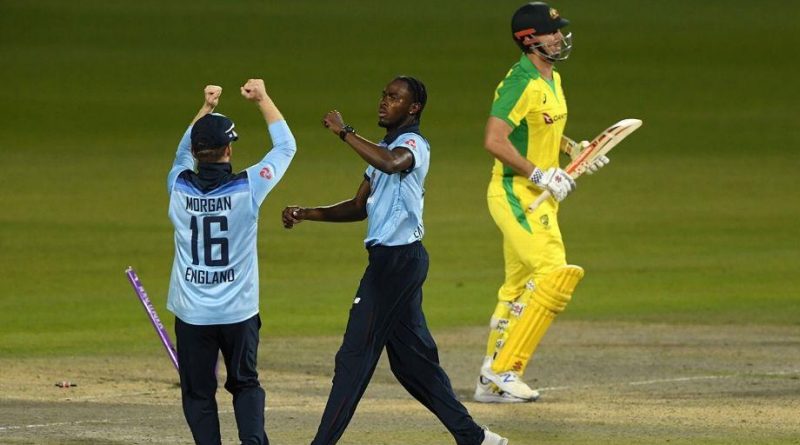 Lightning does strike twice. Because, for a second time on this tour, Australia were let down by the oddity of their middle-order flakiness in the face of pressure. England have not lost three ODIs in a row since 2016. They haven’t lost a bilateral ODI series at home since 2015. Both those runs appeared to have run their course before Australia contrived to squander a position of near invincibility and keep them going.

In the T20I at Southampton, it was 4 for 9, here it was 4 for 3. Just before this manic 20-ball period, Marnus Labuschagne had walked across his stumps and swat-pulled Chris Woakes for a boundary in the 29th over, bringing the 100 of his partnership with captain Aaron Finch. Australia needed less than 100 to win with eight wickets in hand. Even on a used wicket that had been tough for batting throughout the day, this seemed a foregone conclusion as evidenced by Labuschagne coolly blowing a bubble with his gum.

Minutes later, he spat and swatted his gum away, having been dismissed for 48. The end of the 107-run partnership instantly brought back to light just how difficult it was to start an innings on this wicket. Incidentally, even before that dismissal at 144/2, Morgan had made his final punt, bringing back both his ace bowlers – Jofra Archer and Woakes – with an eye on wickets, even if it came at the risk of the pair bowling out by the 35th over.

It was a tactical masterstroke. Woakes had pinged Labsuchagne plumb in front, although he needed DRS to end the century stand. Archer, who’d knocked over David Warner – for the fourth time this tour – and Marcus Stoinis in a furious first spell, then had Mitchell Marsh play one on to his stumps. A well-set Finch (73 off 105) and Glenn Maxwell then played inside the line to identical Woakes deliveries and lost their stumps and panic and gloom simultaneously descended on the Australian dressing room.

Australia never recovered. The pitch wouldn’t allow them to. Sam Curran came back into the attack and removed Pat Cummins and Mitchell Starc off successive deliveries and later added Adam Zampa for a third. Alex Carey battled all by himself, setting himself up for a 1-v-1 showdown against Adil Rashid, but the nature of the collapse through the middle put that task beyond him. Eventually, Australia finished 24 short of England’s total of 231.

The margin of defeat will force Finch and Justin Langer to look beyond their batting frailties. For England had been tottering themselves at 149 for 8 after opting to bat on a powder blue afternoon. Tom Curran, who went wicketless in his 10 miserly overs amid the bowling feast, scored a very crucial 37 and added 76 for the ninth wicket with Rashid, the pair milking 53 off the final four overs to power the total past 230.

Until then it seemed like the kind of match when it was safe for an England supporter to pop out to the kitchen every now and then in search of comfort food. An unchanged Australia kept going about their business, turning the screws on the World Champions’ batting line-up as they had done in the opening game.

Mitchell Starc swung the ball at pace and into the right-handed Jason Roy, who summoned the DRS to overturn an LBW decision in the first over. That inswinger however played tricks on Jonny Bairstow’s mind when he first faced Starc three overs later, as he played for the ball bending back into him and ended up edging one angled across him for a seven-ball duck. Roy, who appeared to have founding a charging way against the metronome of Josh Hazlewood, was then run-out with a sharp pick-up and aim from Marcus Stoinis.

The openers’ dismissal forced Root and Morgan into a period of consolidation. In particular, Root found himself stuck in quicksand, with all his attempts to break the shackles, leaving him stuck even more. At the 10-over mark, Root was 3 off 25. Eventually the pair knuckled down and put on a sedate half-century stand but the introduction of spin snuffed that optimism out quickly. Adam Zampa took out Root, Morgan and last game’s centurion Sam Billings.

Jos Buttler fell cheaply to Cummins and Moeen Ali, whose prowess against spin may have been useful here, was benched along with Mark Wood in favour of the Curran brothers. Australia, Cummins in particular, lost their way with the ball at the end, allowing England those vital runs. But when Australia were 142 for 2 in the chase, the bowling mistakes didn’t seem to make much of a difference. Alas.