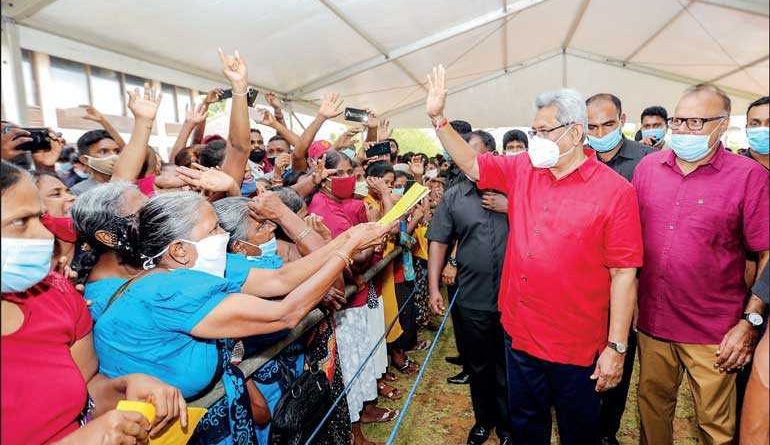 President Gotabaya Rajapaksa yesterday attended several public meetings in Colombo in support of Sri Lanka Podujana Peramuna (SLPP) candidates contesting the upcoming General Election. The general public in area requested the President to eradicate the drug menace from the country, similar to the manner in which he provided them with housing after doing away with the slums.

“Many lives, including both youths and adults, have perished due to drug addiction. This is one of the pressing issues faced by us,” residents in Mattakkuliya told the President. People of the area expressed these views during a public gathering attended by President Rajapaksa yesterday in Crow Island, Mattakkuliya.

The meeting was organised by SLPP candidate Anura Fernando. Minister Dinesh Gunawardena was also present. The residents expressed their confidence in President Gotabaya Rajapaksa as the only leader who can wipe out this peril from the society. They also requested the President to construct more houses by removing the remaining shanties in the area. In response, the President requested the public to give him a strong Government to resume development activities which were stalled in 2015. The President also attended public gatherings organised by SLPP candidates Premanath C. Dolawatta in Hyde Park in Colombo, and Thilanga Sumathipala in Victoria Park.  People insisted the President build a secured country for the benefit of the future generation, while continuing the development projects. The President, joining public gatherings organised by the former Minister Susil Premajayantha at Dabare Road, Narahenpita, and Sarath Weerasekara at Dematagoda, requested the people to support him in forming a stable and strong Parliament to build a prosperous country.

President Rajapaksa positively responded to a request made by people living in Kolonnawa to provide a Regional Health Services Centre for their benefit. This request was made to the President when he joined the public gathering organised by Ajith Subasinghe in Kolonnawa.

President Rajapaksa received a warm welcome from the people gathered at the public rallies organised by Udaya Gammanpila in front of Diyatha Uyana, Battaramulla, and former Minister Wimal Weerawansa at Buddhadasa Ground. The Maha Sangha and other religious leaders also participated in these public meetings.