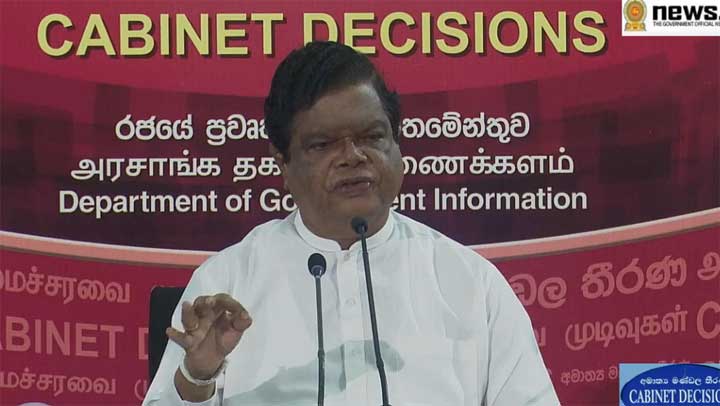 ECONOMYNEXT – Sri Lanka will turn billions of rupees worth contractors bills due from government into money at 4 percent, by re-financing them though the central bank, Information Minister Bandula Gunewardene has said.

There were 240 billion rupees of arrears due to contractors for work carried out for the government in the past, Minister Gunewardene said.

The contractors were ‘completely stuck’ due to payment delays he said.

“If the government has approved work done by your company – lets say for 50 billion rupees – for that a bill is given,” Minister Gunewardene explained.

“A bill that has to be settled (nirawul kala yuthu bill pathak). Against this concessionary credit is given.

“Until the government settles those bills in a future budget, instead of keeping a paper, the opportunity to turn the paper into money has been given (kadadasiya deelar mudal tikker ganna).

“Then they can start their business again.”

It is not clear how much of the bills would be discounted at the central bank.

Sri Lanka’s central bank said on June 16 that a total of 150 billion rupees of re-finance (printed money) would be provided to banks at 01 percent to on-lend to Coronavirus affected businesses at 4 percent raising an original 50 billion rupee facility.

“In addition, the construction sector enterprises will be provided with a facility to borrow from LCBs, using guarantees issued by the government equivalent to the amount due on account of contracts carried out in the past, under a new dedicated credit scheme funded by the Central Bank and made available at the aforementioned concessionary rates,” the central bank said.

Earlier in June the monetary authority came under fire from President Gotabaya Rajapaksa for not increasing the 50 billion rupee facility to 150 billion rupees when it was first ordered to do so.

The central bank then tripp;ed the facility and said also cut the reserve ratio by another 2 percent releasing another 115 billion rupees in to money markets.

Auction yields of Sri Lanka rupee bonds have fallen below that of dollar bonds since then.

Minister Gunewardene said the scheme to re-finance bills into money was made due to the inability to immediately pay contractors through the budet.

“The government once tried to increase the vote-on-account to pay for the contractors and that was not allowed,” Minister Gunewardene said.

“So we have started a new system.”

He said the new re-finance schemes would increase money circulation and give new life to the economy.

Soon after the then-parliament which was controlled by the opposition refused to expand the limits of the vote-on-account, it was dissolved for elections. Since then spending has been allocated by a budget using a constitutional provision.

A similar scheme of discounting bills through the central bank was started in 1932 by the then Reichsbank President Hans Luther for public works called OFFA bills, economic analysts say.

To circumvent budget rules bills were issued through a company called Deutsche Gesellschaft für öffentliche Arbeiten AG, (OFFA) which were to be re-financed by discounting with the central bank.

In 1933, when the Reichsbank was pressed to increase OFFA bill operations to finance arms production, Luther refused.

He was replaced by Hjalmar Schacht as the President of Reichsbank. Schacht issued bills through another company called MEFO to defence contractors. MEFO bills carried an interest rate of 4 percent.

“MEFO led to monetary instability and foreign exchange problems for Germany and Schacht tried to reduce the impact by trying to extend the maturity up to five years,” says ENs economic columnist Bellwether says.

“Due to foreign exchange problems Germany then struck deals with various countries including later Axis powers like Romania to import raw materials.”

By re-financing bills from a different company, Schacht also circumvented Reichsbank rules against printing money for the budget.

Sri Lanka’s central bank, like several central banks promoted by US New Dealers after the end of World War II, has no such strict limitations and has regularly monetized government debt leading to high inflation and currency depreciation.

The rupee has fallen from 4.70 to 186 to the US dollar since the creation of the central bank in 1951, abolishing a currency board which was in operation until then.

Due to classical economic illiteracy and strong beliefs in Mercantilism many in Sri Lanka believe that monetary instability in the form of currency depreciation and balance of payments troubles are due to trade and not money and credit.

Data released by the central bank this week showed that about 203 billion rupees had been printed in March and April, not counting about another 175 billion rupees released to the banking system though reserve ratio cuts.

Up to June 28 billion had been given through 1-percent re-finance, at time when the reverse repo rate is 6.5 percent.

About 1.3 billion dollars in reserves had been lost to mop up the liqudity. Another 200 billion rupees of excess liquidity (about 1.1 billion US dollars) is sloshing about in the banking system.

The excess money (until they are mopped up through currency defence) is parked at the central bank at 5.5 percent, which analysts say may help avert some mal-investments. However stock prices are rising.

Sri Lanka has been undner strict import controls and exchange controls from April. Private credit had begun to fall in April after the economy was locked down to fight Coronavirus data showed, easing pressure on the currency.

Minister Gunewardene said the exchange controls would be extended for another 6 months from July. (Colombo/June27/2020)