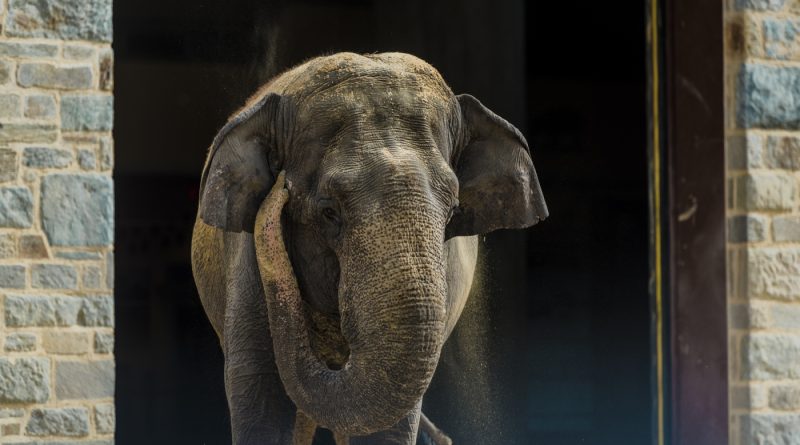 LNP – The Smithsonian’s National Zoo and Conservation Biology Institute community is mourning the loss of Shanthi, beloved member of its Asian elephant herd and ambassador for her species. After decades of managing and treating Shanthi’s osteoarthritis, animal care staff recently noted that her physical condition had irreversibly declined. They elected to humanely euthanize her June 26. Shanthi was estimated to be around 45 years old. Female Asian elephants in human care typically live into their mid-40s; scientists speculate wild Asian elephants have a similar lifespan. During Shanthi’s 44-year-long tenure at the Zoo, she made significant contributions to the conservation community’s knowledge about the biology, reproduction, diseases and ecology of this critically endangered species.

“Generations of staff and visitors have come to know and love Shanthi and, by extension, Asian elephants,” said Steven Monfort, John and Adrienne Mars Director, Smithsonian’s National Zoo and Conservation Biology Institute. “Her contributions to research and medicine have made an indelible mark on our efforts to save her wild counterparts from extinction, as well as improve the lives of her fellow animal ambassadors. Over the past few years in particular, our elephant and veterinary teams have gone the extra mile to ensure Shanthi’s physical, social and mental well-being. They have her best interest at heart, and I am grateful for their professionalism in providing her with extraordinary care and compassion.”

Like many aging animals, Shanthi had osteoarthritis, a degenerative disease affecting joint cartilage and the underlying bone with associated pain and stiffness. She was first diagnosed with the chronic condition in her carpi (wrists) when she was in her teens, and elephant keepers and veterinarians have spent decades successfully managing her disease with multi-modal therapies. While arthritis does not have a cure, animal care staff implemented innovative ways to control Shanthi’s condition, ease her discomfort and improve her overall quality of life. Shanthi was the first to receive therapies that had not previously been used in elephants, including intra-articular (joint) injections of Interleukin-1 Receptor Antagonist Protein (IRAP)—a treatment using autologous conditioned serum to slow the progression of osteoarthritis—from  2016 through 2018, and Osphos—an intra-muscular medication that helps to minimize bony remodeling—in April 2019. In addition, the team managed Shanthi’s comfort using non-steroidal anti-inflammatories, analgesics and joint supplements.

As part of their daily husbandry routine, elephant keepers use a chart to track the animals’ daily activity, movement, appetite and social interactions. Over the past several weeks, the level of pain and discomfort Shanthi experienced appeared to significantly increase. She frequently interrupted her walks to rest, took multiple breaks during routine pedicures, could not get comfortable to sleep at night and sometimes winced when taking a step. Her physical limitations affected her social relationships with her herd mates, namely Bozie and Swarna. Animal care staff were concerned that Shanthi did not have the energy or ability to move about as much as the other elephants, which led her to spend less time with them. Because she chose not to lie down or enter the pools to relieve the pressure on her joints, keepers provided her with sand-piles, tractor tires and large logs to lean against for support. Given Shanthi’s declining quality of life and poor long-term prognosis, animal care staff made the decision to humanely euthanize her.

Shanthi’s euthanasia took place in the Elephant Barn. Bozie, Maharani, Spike and Swarna were not present for the procedure, but were given an opportunity to spend some time with their deceased herd mate given their close bond with her. Many scientists believe that the process of exploring the body of the deceased elephant is a recognition of the death and is likely part of a grieving process. Elephants will commonly touch the temporal glands, ear canal, mouth and trunk tip. Often, they will make a rumble vocalization while inspecting the body. Keepers granted Bozie and Maharani access first, and they walked around Shanthi for about an hour. Bozie assumed a protective stance beside Shanthi, while Maharani inquisitively investigated Shanthi’s trunk. After they departed, Spike and Swarna were allowed into the Barn. Likewise, they sniffed and touched Shanthi with their trunks. Similar to Maharani, Swarna spent some time manipulating Shanthi’s trunk. Elephant care staff described their visits as calm, quiet and gentle.

Born in Sri Lanka around 1975, Shanthi lived at the Pinnawela Elephant Orphanage until 1976 when she arrived at the Smithsonian’s National Zoo as a gift from the children of Sri Lanka. The elephant care team fondly remembers Shanthi as a social and confident elephant, yet one who made caretakers earn her respect and friendship. In particular, she seemed to relish in a husbandry training session or enrichment items that challenged her to think and problem solve.

Most Zoo animals participate in the Association of Zoos and Aquariums’ Species Survival Plan (SSP). The SSP scientists determine which animals to breed by considering their genetic makeup, nutritional and social needs, temperament and overall health. Shanthi’s contribution to the study of Asian elephant reproduction is especially noteworthy. In 1996, she was the first elephant to be artificially inseminated using a new catheter technique with daily hormone monitoring to precisely time ovulation. Today, zoos throughout the globe use this technique to aid in breeding management.

Shanthi was a dedicated and caring mother to two calves: female Kumari (b. 1993) and Kandula, who was born in 2001 as the result of artificial insemination. Their births shed light on important reproductive patterns related to pregnancy, birth and lactation. The information Zoo scientists learned led to improved birth-management protocols for elephants in human care. Kumari died of the elephant endotheliotropic virus (EEHV) in 1995; Kandula currently lives at the Oklahoma City Zoo.

Shanthi was, arguably, the most studied elephant in the world. As part of the Zoo’s enrichment and training program, she voluntarily participated in daily husbandry care and medical procedures. Not only did this allow animal care staff to routinely monitor her health, but also it gave her the opportunity to help Smithsonian Conservation Biology Institute (SCBI) scientists better understand the behavior, biology, reproduction and ecology of Asian elephants. In addition to Shanthi’s contributions to osteoarthritis research, she routinely allowed staff to collect blood samples for SCBI’s endocrine lab, enabling Zoo scientists to study her cortisol levels. Her eating habits, enrichment preferences and movements were cataloged by keepers to help inform best husbandry and management practices, as well as by Zoo scientists who are working to mitigate human–elephant conflict in their native habitats.

Native to 13 countries throughout South Asia and Southeast Asia, Asian elephants are considered endangered by the International Union for Conservation of Nature due to poaching, habitat loss and human–elephant conflict. Conservation scientists estimate the total population to be between 30,000 and 50,000 individuals.

For more than 50 years, scientists at the Zoo and Smithsonian Conservation Biology Institute have been at the forefront of studying Asian elephants at the Zoo and in their native habitats. Together, they are creating a comprehensive view of Asian elephant biology, behavior, reproduction, health, genetics, migration, EEHV and the challenges surrounding human–elephant conflict. Because of its existing relations with U.S. and foreign governments, non-governmental organizations, and major academic and zoological institutions in elephant range countries, the Zoo is uniquely positioned to spearhead efforts that improve life for Asian elephants in zoos and save them in the wild.

As a public health precaution due to COVID-19, the Smithsonian’s National Zoo and Conservation Biology Institute is temporarily closed to the public. Upon reopening, visitors to the Elephant Trails habitat can view the Zoo’s male elephant, Spike, and four female elephants: Bozie, Kamala, Swarna and Maharani. Meantime, visitors to the Zoo’s website can watch them on the Elephant Cam.