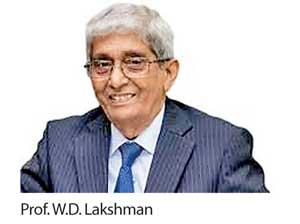 The decisions that were taken last week to further support the economy by way of Central Bank liquidity were neither instantaneous nor a case of being succumbed to the president’s outburst but were measures that were well underway after extensive discussions at the Monetary Board in the week earlier, the Central Bank governor said.

Quashing the claims that the Central Bank made rushed decisions on the day it came under President Gotabaya Rajapaksa’s ire for doing less to revive the coronavirus-battered economy, Central Bank Governor Prof. W.D. Lakshman defended its actions and said those were decided a day earlier through a Monetary Policy paper waiting to go into effect although the said incident advanced.

Last Tuesday, the Monetary Board slashed the bank’s reserve ratio by 200 basis points and tripled its credit support scheme from Rs.50 billion to Rs.150 billion, to support the virus-affected businesses, releasing altogether Rs.250 billion in fresh liquidity to the financial markets.

“In truth, the announced measures were discussed at a special Monetary Board meetings two or three days prior to this event,” Prof. Lakshman said in an interview with Sri Lanka Broadcasting Corporation’s Subharathi programme broadcasted this morning in reference to the infamous incident, where the Central Bank officials were chastised by the president.

“They (the actions) did not come suddenly, just like someone jump from bed but they were under discussion,” he said.

“As I recall, at the Monetary Board meeting held on the previous Thursday, we had decided on how to execute these measures according to the law. And these specific measures were decided on the following Monday via a Monetary Board paper,”
he added.

The speed at which the two Monetary Board actions were announced on the same night after the meeting with the president sent the impression that the Central Bank, which was in deep slumber, got suddenly into action after coming under fire.

The Central Bank in fact had already taken a lot of measures to provide support to borrowers via slashing the borrowing cost in the economy, concessions and moratoriums, easing regulations to ensure banking and finance companies’ liquidity and introduced a refinance schemes to support virus-hit businesses.

However, last week’s incident sparked fresh debate about the independence of the Central Bank.
Central banks around the world have been providing unconditional support by way of liquidity to banks and businesses as they have never done before, to make a strong come back after the worst economic crisis sparked by a pandemic.

“As a person as well as an economist, what I have always believed in was that a sustained economic growth cannot be achieved following the conventional path. What I have also believed in was need for ‘out-of-the-box thinking. The COVID-19 pandemic was a time this thinking is absolutely needed,” Prof. Lakshman said.

“The sheer magnitude of the crisis has prompted even those officials in the Central Bank with the conventional thinking to incline into thinking out-of-the-box. But there was not enough speed,” he added.