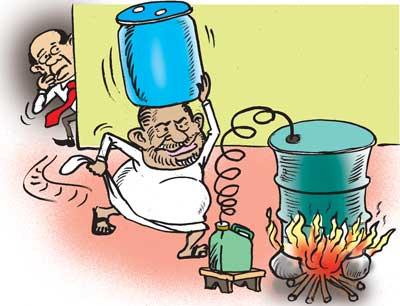 he coronavirus that has greatly changed our way of life has given rise to a host of new essentials as well. For instance, hand sanitizers, something unheard of for most people before the outbreak of the pandemic, has become essential and is in much demand in the market.

Finding that the number of applications for the permit from prospective hand sanitizer makers was unbelievably high, the authority concerned had done some investigation on his own and found that the majority of applicants for the permit were kasippu mudalalis,who had no interest in the hand sanitizer at all and they had planned to distil hooch from ethanol at a low cost!
Investigations have also revealed that there were politicos and some public figures among the new applicants and pressure from some political high-ups to issue ethanol permits to their favourites.

The permit-issuing authority later decided to use a ploy to frustrate those planning to purchase ethanol to manufacture hooch: to add a certain chemical to the ethanol to be issued to those seeking to procure it for producing hand sanitizers so that it could not be used to manufacture Kasippu!

This has resulted in there being a sharp drop in the number of applicants for ethanol to make hand sanitizers, they say.