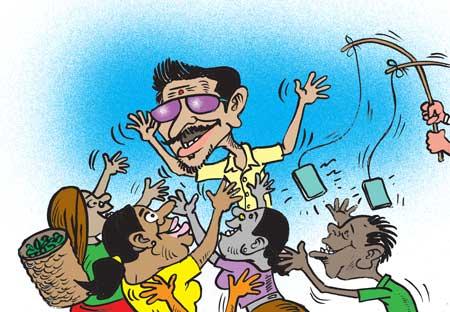 The Pohottuwa hierarchy has decided to give the nomination to the young son of the late CWC leader to contest from the Nuwara Eliya district at the forthcoming general polls.

Young and handsome Jeewan looking like a typical film star has already attracted the attention of the younger generation in the upcountry estate sector from both Tamil and Sinhala communities, they say.

Meanwhile, reports say Jeewan, on the up and up as a young politico, seems to be fast winning the preferential votes and his advent has highly perturbed two ‘leaders’ already in the battle for preferential votes in the Nuwara-Eliya District. In fact, these two leaders at previous polls had succeeded in mustering votes from both Tamil and Sinhala areas in the district.

The two leaders, fearing a sharp dwindling of the potential preference votes have now launched several new programmes like ‘free mobile data’ and ‘free reloads’ to attract the youth in particular, they say.