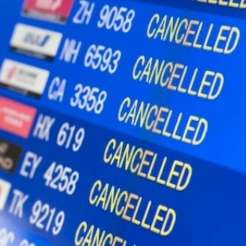 A flight with Sri Lankan passengers which was scheduled to arrive in the country tomorrow from Qatar was cancelled after more than 70 COVID-19 patients were found among the 466 passengers previously arrived from Qatar and at quarantine centres, Additional Secretary to the President for Foreign Relations Jayanath Colombage said.

He said previous passengers arrived in the country from Kuwait on May 19.

The cancelled flight (UL218) was scheduled to leave from Doha at 5.45 a.m with 273 Sri Lankan Passengers.

However, a senior official of the airport said a large number of persons including Airport service personnel, health service officers and armed forces personals had taken to PCR tests at the airport today following the arrival of 466 Sri Lankan passengers from Kuwait on May 19.

Meanwhile, an Emirates flight had arrived in the country from Dubai with one Sri Lankan passenger who was stranded in South Africa for two months.

That passenger was a technical officer attached to the Emirates Airlines. He has been stranded in South Africa for two months after completing his trainings.